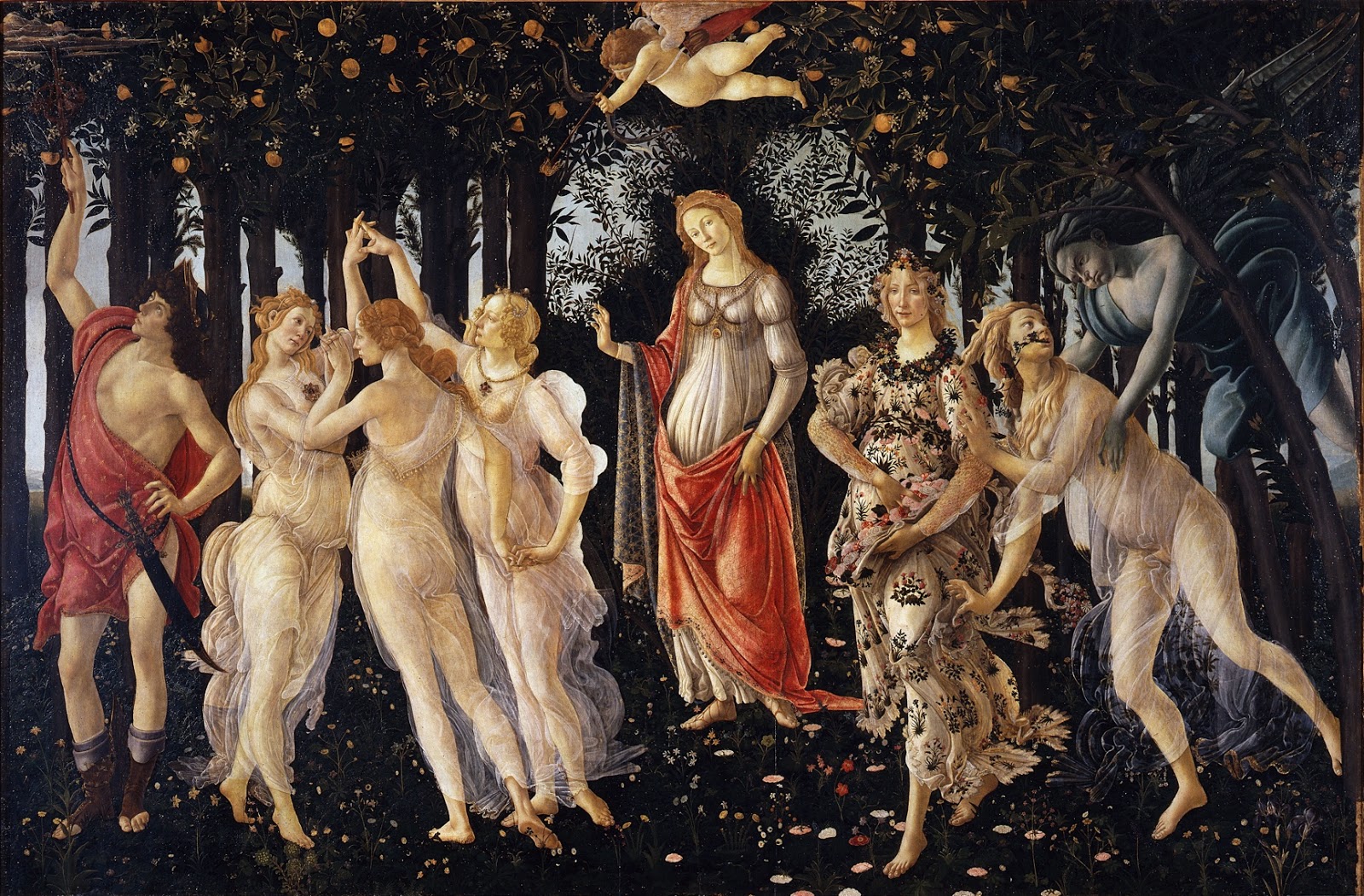 For Art Sunday today a single painting, “La Primavera”, one of my favourite by Botticelli. Sandro Botticelli was born in Florence, in 1445. He spent his whole life there except for a visit to Rome. Botticelli was a member of the Medici clan and his real name was Alessandro Filipepi. He was nicknamed Botticelli (“little barrel”) when he went to be apprenticed by his brother, a goldsmith.

Botticelli had deep-set eyes, flowing fair locks and a prominent nose. His sense of humour was well-known in his times and his pranks were the talk of the town. He was also a very talented draughtsman, something that did not escape the practised eye of his brother. When Botticelli was about 15 he was sent to the great painter, Fra Filippo Lippi. There, as was the custom of the times, he learned how to mix colors and clean brushes in the great artist’s studio. He then moved up in the studio hierarchy by painting grounds and backgrounds, drapery, and finally lesser compositional features. Botticelli was greatly influenced by his teacher in both style and colour. However, as soon as the young artist could decide to paint his own canvases, his themes and iconography became very different from his master’s.

By 1465, Botticelli had his own studio. His family connections ensured that the Medicis commissioned works from him. Sure enough, Botticelli made his living, like any other artist of the time, by painting religious scenes, although his interest was far removed from religion. Behind the walls of the Medici Palace Botticelli listened to philosophical debates and classical legends, discussed amongst Lorenzo de’ Medici’s intellectual friends. Botticelli was inspired, and under the protection of the Medici, he created an entirely new genre of art: That of the mythological allegory. After the age of 56 years no paintings were found that were painted by him. Botticelli died alone and infirm. He lived to be about 65 and died around 1510.

“La Primavera” (1478) is not portrait, not icon nor holy celebration. It is pure fantasy, inspired by poetry, and fuelled by the artist’s fertile imagination. This painting shows Venus, ancient goddess of beauty and fertility, celebrating the arrival of Spring, “la Primavera”. She is surrounded by allegorical figures representing the virtues and gods of the ancient world. It was a subject guaranteed to please Lorenzo de’ Medici, Botticelli's protector, and no detail was overlooked. Even the laurel bushes behind Venus served to represent the rebirth of a golden age, under the patronage of Laurentius - Lorenzo – de’ Medici.  With such a sophisticated understanding of his friends' arcane ideas, Botticelli had successfully developed his own form of visual poetry, peppered with symbolism and private jokes.

In this enormous painting (203 x 314 cm) Sandro Botticelli paints a rich tapestry of allegory, celebrating Spring, Nature’s favourite season. Spring in her flowered dress enters the scene from the right, attended by Chloris (Flora), who is the goddess of vegetation and flowers. Zephyrus is the Greek god of the west wind, who was believed to live in a cave in Thrace. He is the one who abducted the goddess Chloris and gave her dominion over flowers. Botticelli captures the moment of the abduction here, and Zephyrus’s gift of flowers is seen to grace Chloris’ face, as she seeks the protection of Spring. La Primavera seems to be serene and impassive, unwilling to interfere in the abduction. Her enigmatic smile and eyes that look away, towards us (almost complicitly) as if to tell us that none should stand in the way of such passion. Spring ushers in love and the male force, unstoppable and impetuous overwhelms the female force, which seemingly is overcome, but will emerge the winner.

Counterbalancing this scene, the Charites, or three Graces, are depicted on the left. These are the goddesses that personify charm and beauty in nature and in human life. They protect all things beautiful and bestow talent upon mortals. Together with the Muses they serve as sources of inspiration in poetry and the arts. Originally, they were goddesses of fertility and nature, closely associated with the underworld and the Eleusinian mysteries. As classical civilisation became more sophisticated, their fertility associations waned and their artistic sympathies became their prime patronage.

Aglaëa (“Splendour”) is the youngest of the Graces and is sometimes represented as the wife of Hephaestus. The other Graces are Euphrosyne (“Mirth”) and Thalia (“Good Cheer”). They are usually considered the daughters of Zeus and Eurynome, or Dionysus and Aphrodite. According to Homer the Graces belonged to the retinue of Aphrodite. The Romans knew them under the collective name of the Gratiae. Botticelli paints them intertwined in a delicate dance, their gossamer pepla counterpointing their delicate and beautiful features.

On the extreme left is the only other male figure in the painting, Hermes (Mercury), the herald of the gods. He was the god of communication, commerce and patron of shepherds, land travel, merchants, weights and measures, oratory, literature, athletics and thieves, and known for his cunning and shrewdness. It was one of his main duties to guide the souls of the dead down to the underworld, for which he is known as a psychopomp (“soul sender”). He was also closely connected with bringing dreams to mortals. Hermes is usually depicted with a broad-brimmed hat or a winged cap, winged sandals and the herald’s staff.

One of his older manifestations was as a fertility god of vegetation and animal generation. He was invoked for good fortune, and he was also a patron of roads and boundaries. In this role he was commemorated by “herms”. A herm is a square or rectangular pillar in either stone or bronze, with the head of Hermes (usually with a beard), which adorned the top of the pillar, and male genitals near to the base of the pillar. These were used for road and boundary markers. In Athens they also stood outside houses to help fend off evil.

Central in the painting is the goddess Aphrodite (Venus) and above her flies her son, Eros (Cupid). Aphrodite is the goddess of love, beauty and sexual rapture. According to Hesiod, she was born when Uranus (the father of the gods) was castrated by his son Cronus. Cronus threw the severed genitals into the ocean, which began to churn and foam about them. From the aphros (“sea foam”) arose Aphrodite, and the sea carried her to either Cyprus or Cythera. Hence she is often referred to as Kypris and Cytherea. Homer calls her a daughter of Zeus and Dione.

After her birth, Zeus was afraid that the gods would fight over Aphrodite’s hand in marriage so he married her off to the god Hephaestus, the smith of the gods. He could hardly believe his good luck and used all his skills to make the most lavish jewels for her. He made her a girdle of finely wrought gold and wove magic into the filigree work. That was not very wise of him, for when she wore her magic girdle no one could resist her, and she was all too irresistible already. She loved gaiety and glamour and was not at all pleased at being the wife of sooty, hard-working Hephaestus, and cuckolded him many a time.

Aphrodite loved and was loved by many gods and mortals. Among her mortal lovers, the most famous was perhaps Adonis. Some of her sons are Eros, Anteros, Hymenaios and Aeneas (with her Trojan lover Anchises). She is accompanied by the Graces. Eros is usually depicted as a young winged boy, with his bow and arrows at the ready, to either shoot into the hearts of gods or mortals which would rouse them to desire. His arrows came in two types: Golden with dove feathers which aroused love; or leaden arrows which had owl feathers that caused indifference. Sappho the poet summarised Eros as being bitter sweet, and cruel to his victims, yet he was also charming and very beautiful. Being unscrupulous, and a danger to those around him, Eros would make as much mischief as he possibly could by wounding the hearts of all.
Posted by Intelliblog at 04:54