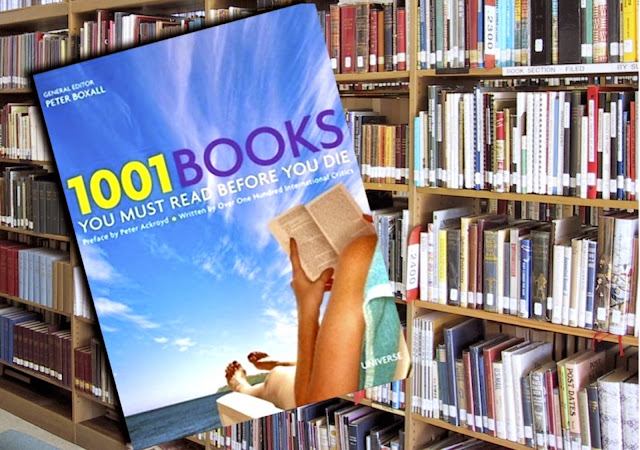 “The man who does not read good books has no advantage over the man who can't read them.” - Mark Twain

A couple of weeks ago I saw the 2004 Italian film called “Agatha and the Storm”. The Agatha of the title is woman central to the story and the owner of a bookshop. Many amusing scenes in the movie concern people who come into the bookshop looking for a book to read but having no idea what they want, so Agatha has to suggest to them what book to buy and read.

The movie is a quirky comedy about life-changing events that happen in two families, when a man finds out his real mother is not the one who has brought him up. This revelation causes him to change his life, getting to know his new relatives, while dealing with the relatives he thought were his. This all leads to one big extended family that is far from normal. Agatha is his sister, a single woman who runs a book store. She has a relationship with a much younger man who maintains he is in love with her. A problem for Agatha is that the man is married. But that’s not all, Agatha seems to have an uncanny effect on light bulbs and electrical appliances, which seem to malfunction and blow up when she goes near them. Wisdom and resolution come from traditional Chinese medicine and from good literature!

Watching the movie, I realised that we often rely on other people’s recommendations for new books to read and new authors to discover, so the theme for Literary Tuesday is “Recommended Readings”. A book that I saw in one of my forays into second-hand bookshops is “1001 Books You Must Read Before You Die”. Peter Boxall, the editor, and he is a lecturer in English Literature at the University of Sussex. He has published widely on twentieth and twenty-first century fiction and drama. Here is the book description from the publisher (“Universe” March 7, 2006):

“For discerning bibliophiles and readers who enjoy unforgettable classic literature, “1001 Books You Must Read Before You Die” is a trove of reviews covering a century of memorable writing. Each work of literature featured here is a seminal work key to understanding and appreciating the written word. The featured works have been handpicked by a team of international critics and literary luminaries, including Derek Attridge (world expert on James Joyce), Cedric Watts (renowned authority on Joseph Conrad and Graham Greene), Laura Marcus (noted Virginia Woolf expert), and David Mariott (poet and expert on African-American literature), among some twenty others. Addictive, browsable, knowledgeable – “1001 Books You Must Read Before You Die” will be a boon companion for anyone who loves good writing and an inspiration for anyone who is just beginning to discover a love of books. Each entry is accompanied by an authoritative yet opinionated critical essay describing the importance and influence of the work in question. Also included are publishing history and career details about the authors, as well as reproductions of period dust jackets and book designs.”

The team behind this book challenges you to read a sampling from a different centuries and genres of what they believe is the best of the best. The titles selected are generally no the sort of book that you can read while watching TV or having your hair done and the hairdresser is prattling on. Rather, the emphasis is on books you can really sink your teeth into, books that make you really think. You know the ones, those that you want to discuss with everyone you’ve ever met (including strangers on the bus)!

A sampling of titles of some of the books suggested (in no particular order and using on other criteria except that I read them and agree with the inclusion in the list):
“Aesop’s Fables” by Aesop
“Catch-22” by Joseph Heller
“Crime and Punishment” by Fyodor Dostoevsky
“The Great Gatsby” by F. Scott Fitzgerald
“The Plague” by Albert Camus
“Les Misérables” by Victor Hugo
“Robinson Crusoe” by Daniel Defoe
“Northanger Abbey” by Jane Austen
“Moby Dick” by Herman Melville
“Metamorphoses” by Ovid
“Don Quixote” by Miguel de Cervantes Saavedra
“Wilhelm Meister’s Apprenticeship” by Johann Wolfgang von Goethe
“The Red and the Black” by Stendhal
“Dead Souls” by Nikolay Gogol
“Wuthering Heights” by Emily Brontë
“The House by the Medlar Tree” by Giovanni Verga
“Bel-Ami” by Guy de Maupassant
“Death in Venice” by Thomas Mann
“Amok” by Stefan Zweig
“Steppenwolf” by Herman Hesse
“Out of Africa” – Isak Dinesen (Karen Blixen), etc etc…

For the other 980 recommendations, buy Dr Boxall’s Book!
Happy reading!
Posted by Intelliblog at 04:28