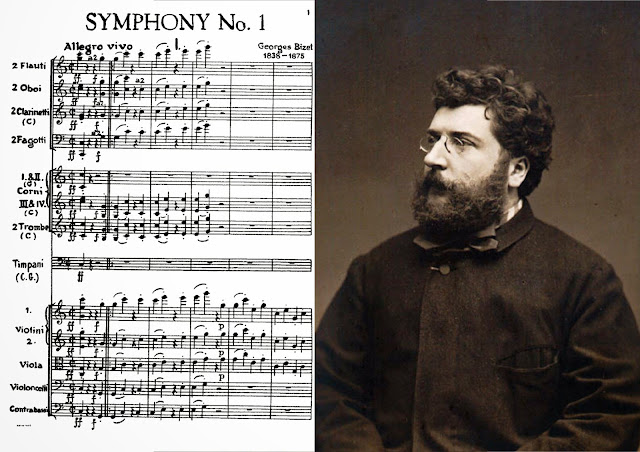 Georges Bizet (1838 - 1875) is best known for his operatic masterpiece, “Carmen”. Not so well known is the fact that he died from a heart attack only a few months after its first performance at the age of 36. Death at such a young age immediately reminds us of Mozart, Mendelssohn and Schubert. His life parallels these composers also in the sense that he was yet another musical prodigy whose ability, encouraged by his musical parents, was exceptional. Despite being against the rules, he was admitted into the Paris Conservatory at the phenomenal age of nine years.

He was born in Paris and originally registered under the name Alexandre César Léopold Bizet, but then baptised as Georges by which name he was always to be known. With the exception of a few years in Rome, he stayed in or near Paris for most of his life. At the Conservatory he studied under many great musicians including professor Jacques Halévy. The Halévy family were to have quite an impact on Bizet’s life, not least the fact that he was later to marry the professor’s daughter Geneviéve and father a son Jaques, perhaps named after his grandfather.

Continuing his precocious youth, he composed his first Symphony (in C major) at age 17 (modelled closely on Gounod’s Symphony No. 1 in D). Then in 1857 having previously won several prizes at the Conservatoire, he won the prestigious Prix de Rome. The contemporary French composers of the day who influenced Bizet to varying degrees included Charles Gounod, Léo Delibes, Camille Saint-Saëns, Jules Massenet and the German-born Jacques Offenbach. All of these were opera composers to some extent though often light or comic opera. In comparison, Bizet’s operas and particularly Carmen tended to stand out as highly dramatic and dealing in deeper emotions. Though not straying too far from French traditions, he perhaps adopted some of the styles of Italian and German opera from Verdi and Wagner respectively.

While he did make use of the newly invented saxophone, he wasn’t particularly known as a trendsetter. He seemed to change direction several times, dropping ideas that he had started, and seemingly insecure and sensitive to criticism. Although perhaps expected of artists, the public probably thought of him as something of a Bohemian outsider. Musically, he seemed to have a natural gift for melody and a certain artistic confidence seems to flow from his music.

When the Franco-Prussian war broke out in 1870, although exempt from national service as a Prix de Rome winner, Bizet nevertheless enlisted in the National Guard. Although many of his countrymen and fellow musicians were highly nationalistic in their approach to the war, Bizet was far more down-to-earth in his understanding of the real horrors of war. Again we see a realism in his outlook on life which also manifested itself in his operatic story-telling.

Above all Bizet aspired to be a composer of opera, though his numerous (about 30 in total) works for that medium weren’t universally successful. He also wrote various orchestral works, keyboard pieces and songs. The following are his best known or most respected compositions:
Opera - The Pearl Fishers, set in exotic Ceylon (now Sri Lanka), with a famous duet for male voices
Opera - The Fair Maid of Perth
Opera – Djamileh
Opera - Carmen, in 4 acts, the most famous. Highly popular orchestral suites from this opera are performed as stand-alone works in the concert hall.
Symphony in C - composed at age 17, this was not performed until 1935
Rome Suite - orchestral suite intended as a Symphony
L’ Arlésienne - (the girl from Arles, in Provence) this was originally composed for a limited group of instruments as incidental music to a play by Daudet, but later fashioned into 2 orchestral suites, the first suite by Bizet himself and the second after his death by a friend Ernest Guiraud
Chromatic Variations - for piano
Jeux d’ Enfants (Children’s Games) - for piano duet, but also sometimes heard in orchestral arrangements. This is a delightful set of 12 pieces, each based on a different game (many still familiar today.