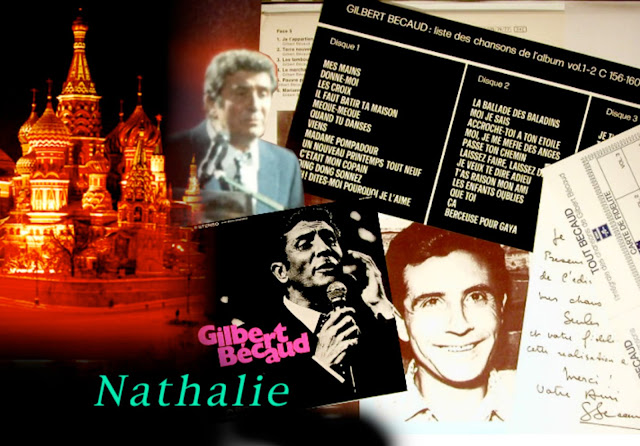 “Nostalgia is like a grammar lesson: you find the present tense, but the past perfect.” - Owens Lee Pomeroy

Gilbert Bécaud - the legendary “Mr 100,000 volts” of the French music world - rose to fame in the 1950s and enjoyed a successful career spanning more than 40 years before he died in December 2001. One of the most popular music French stars of all time, Bécaud performed at the famous Olympia music hall in Paris 33 times, a record!

Gilbert Bécaud, was born François Silly in Toulon, a lively port on the Mediterranean coast on 24 October 1927. François had a relatively happy upbringing, despite the fact that his father abandoned the family while François was still in early childhood. Madame Silly’s new partner, Louis Bécaud, raised François, Jean and Odette as his own children, although he was never able to marry their mother (her first husband steadfastly refusing to consent to a divorce). From an early age, François showed an enormous musical talent and he was able to study in the Nice conservatory until the war put an end to his studies in 1942. During the war François and his older brother Jean joined the resistance. After the war the family settled in Paris where François began to work in nightclubs and wrote songs.

He soon met Maurice Vidalin and Pierre Delanoë, fellow songwriters and the team wrote many successful songs well into the ‘50s. He met Edith Piaf, wrote her some songs and went on to manage Edith. In 1952 François officially adopted his new stage name, Gilbert Bécaud. It was also around this time that the singer began to forge his legendary image, sporting the famous spotted tie, which would appear around his neck at every single concert throughout the rest of his career.

In 1954 Bécaud was invited to inaugurate the newly refurbished Olympia music hall in Paris and such was the excitement of the crowd that they began ripping out seats and destroying L’Olympia’s brand new decor. This kind of behaviour at a concert was totally out of the ordinary in the 1950’s and the French press had an absolute field day over the affair. Numerous papers and magazines ran stories on Bécaud’s explosive concert, dubbing the young singer “Monsieur Dynamite”, “The Atomic Bomb” and, most famously of all, “Monsieur 100,000 volts”.

In 1961 Bécaud rocketed to the top of the French charts once again with his enormously successful hit single “Et Maintenant”. This was written by Pierre Delanoë and would prove to be one of the most famous songs of Gilbert Bécaud’s entire career. The song would be covered more than 150 times by a host of French stars and the English version of “Et maintenant”, entitled “What now my love”, would go on to become an international hit in its own right.

In 1964 Bécaud returned to the studio to record a new single entitled "Nathalie". This single proved phenomenally successful, selling thousands of copies within months of its release. Indeed, "Nathalie" would go on to become one of the most famous hits of his entire career. Later that same year Bécaud would perform "Nathalie" live on stage at the Olympia, during his tenth concert performance at the legendary Paris music hall. He went on to record many more hits and remained a successful singer/songwriter until his death in 2001.

It is this last-mentioned song that I wish to share with you today as I associate it with some of my earliest childhood memories in Athens. We had the record at home and I remember hearing it often and being enthused by its poignancy and vibrancy even at my very tender age.

The Red Square was empty
In front of me walked Nathalie;
She had a pretty name, my guide:
Nathalie.

The Red Square was white,
The snow made a carpet.
And I followed, on this cold Sunday,
Nathalie.

She spoke in sober sentences
About the October Revolution.
I thought that after seeing the tomb of Lenin
We would go to the Pushkin Café
To drink a hot chocolate.

The Red Square was empty
I held her arm, she smiled
She had fair hair, my guide, Nathalie,
Nathalie.

In her room, at the university
A group of students awaited us impatiently
We laughed, we spoke much.
They wanted to know everything,
Nathalie translated.

Moscow, Kremlin square,
And the Champs-Elysées -
We mixed everything up and we sang…
And then, they opened,
While laughing, in anticipation,
A bottle of French champagne,
And we danced.

And when the room was empty
When all the friends had left
I remained alone with my guide,
Nathalie…

No more questions, nor sober sentences
About the October Revolution.
I’m not there any more.
The tomb of Lenin is no more,
The chocolate of the Café Pushkin
Is far away already.

Now my life seems empty,
But I know that one day in Paris
It is I who will be Nathalie’s guide,
Nathalie…

Nostalgia is a bitter-sweet emotion and what better accompaniment to it than an old song that reminds us of those times long ago?
Posted by Intelliblog at 02:37