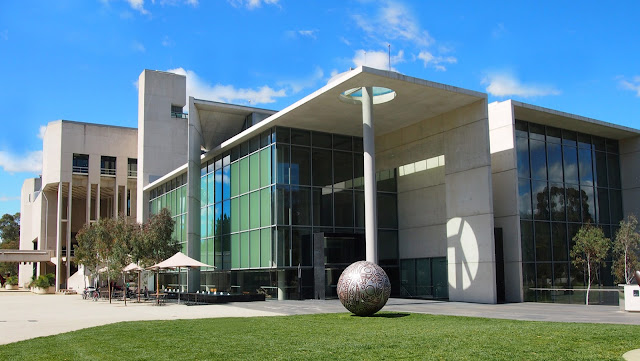 “If art is to nourish the roots of our culture, society must set the artist free to follow his vision wherever it takes him.” - John F. Kennedy

We are visiting Canberra for the weekend to see “Floriade”, the great Spring exhibition of flowers. We also took the opportunity to visit some favourite old haunts, including the National Gallery of Australia, the Canberra Museum and Gallery and the foreshore of Lake Burley Griffin.

Tom Roberts, a famous Australian artist, had lobbied various Australian prime ministers, starting with the first, Edmund Barton, to create a National Gallery. Prime Minister Andrew Fisher accepted the idea in 1910, and the following year Parliament established a bipartisan committee of six political leaders—the Historic Memorials Committee. The Committee decided that the government should collect portraits of Australian governors-general, parliamentary leaders and the principal “fathers” of federation to be painted by Australian artists. This led to the establishment of what became known as the Commonwealth Art Advisory Board (CAAB), which was responsible for art acquisitions until 1973.

From 1912, the building of a permanent building to house the collection in Canberra was the major priority of the CAAB. However, this period included two World Wars and a Depression and governments always considered they had more pressing priorities, including building the initial infrastructure of Canberra and Old Parliament House in the 1920s and the rapid expansion of Canberra and the building of government offices, Lake Burley Griffin and the National Library of Australia in the 1950s and early 1960s. Finally in 1965 the CAAB was able to persuade Prime Minister Robert Menzies to take the steps necessary to establish the gallery. On 1 November 1967, Prime Minister Harold Holt formally announced that the Government would construct the building.

In 1968, Colin Madigan of Edwards Madigan Torzillo and Partners won the competition for the design, even though no design could be finalised, as the final site was now in doubt. In 1971, the Government selected a 17 hectare site on the eastern side of the proposed National Place, between King Edward Terrace and for the Gallery. Even though it was now unlikely that the lakeside Parliament House would proceed, a raised National Place (to hide parking stations) surrounded by national institutions and government offices was still planned. Madigan's brief included the Gallery, a building for the High Court of Australia and the precinct around them, linking to the raised National Place at the centre of the Land Axis of the Parliamentary Triangle, which then led to the National Library on the western side.

The construction of the building commenced in 1973, with the unveiling of a plaque by Prime Minister Gough Whitlam, and it was officially opened by Queen Elizabeth II in 1982, during the premiership of Whitlam’s successor, Malcolm Fraser. The building cost $82 million. The National Gallery building is in the late 20th-century Brutalist style. It is characterised by angular masses and raw concrete surfaces and is surrounded by a series of sculpture gardens planted with Australian native plants and trees. The geometry of the building is based on a triangle, most obviously manifested for visitors in the coffered ceiling grids and tiles of the principal floor. This geometry flows throughout the building, and is reflected in the triangular stair towers, columns and building elements.

The building is principally constructed of reinforced bush hammered concrete, which was also originally the interior wall surface. More recently, the interior walls have been covered with painted wood, to allow for increased flexibility in the display of artworks. The building has 23,000 m2 of floor space. The Gallery has been extended twice, the first of which was the building of new temporary exhibition galleries on the eastern side of the building in 1997, to house large-scale temporary exhibitions, which was designed by Andrew Andersons of PTW Architects. This extension includes a sculptural garden, designed by Fiona Hall. The 2006 enhancement project and new entrance was complemented by a large Australian Garden designed by Adrian McGregor of McGregor Coxall Landscape Architecture and Urban Design.

Just like the city it is found in, the Gallery is not an inviting place. Canberra is an artificial city and it is not built on the human scale. It is designed to be monumental, but it is a monument without memories, a rather cold and sterile place, a city that still struggles to find an identity. To be a pedestrian in Canberra is to be damned - this City was not designed for pedestrians. To get from place to place of interest one needs to drive (through empty space for a lot of the time) and negotiate roundabouts of gigantic proportions.

There are some significant art works in the Gallery, but there is also a lot of dross masquerading as modern art. There is a marked lack of European art prior to the 19th century so if one were to rely solely on this Gallery’s exhibits for one’s art education, it would be a very shallow education indeed. The National Gallery of Victoria in Melbourne is an infinitely richer gallery and one that has a collection that is better balanced (even though it may have less works in total than the NGA). Despite its shortcomings, a visit to Canberra would be inadequate without a visit to NGA…
Posted by Intelliblog at 00:10