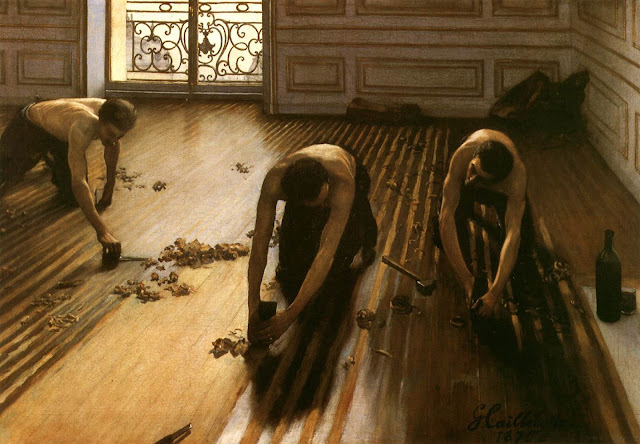 “Pioneers may be picturesque figures, but they are often rather lonely ones.” - Nancy Astor

Gustave Caillebotte (1848-1894), whose personal works were forgotten until recently, was a respected artist and a generous patron of the Impressionist movement. He was born in 1848 in a very rich family, which made its fortune in the textiles industry and then in real estate as Baron Haussmann was rebuilding Paris.

Engineer by profession, but also former student of the Fine Arts School of Paris where he studied with Léon Bonnat, he met Edgar Degas, Claude Monet, and Pierre Auguste Renoir in 1874 and helped them organise their first group exhibition in Paris this same year. In 1873, he inherited the great fortune of his father and was financially independent for the rest of his life.

In 1875, as he wished to make his official debut as a painter, he submitted a work to the Official Salon which was refused, thus encouraging him to exhibit in 1876, with the aid of Renoir, at the second exhibition of the Impressionist group. His works, and in particular the “The floor scrapers”, were noticed and appreciated. He took part in the subsequent exhibitions of the Impressionist Group thereafter.

Caillebotte was rich and generous and throughout his lifetime aided financially his Impressionist friends by buying their works at high prices and by paying the expenses of their exhibitions. He was a co-organiser and co-financier of the third, fourth, fifth and seventh Impressionist exhibitions, in which he took part.

In 1881, he bought a house with a garden in Petit-Gennevilliers where he created a number of his works. He was a highly skilled horticulturist, and he corresponded with Monet at Giverny and cultivated orchids in his greenhouses.

A man with a complex character and multiple facets, Caillebotte also was a racing yachtsman who had a passion for speed and sought to improve the performance of his boats. As a naval architect, he designed and built his boats in a workshop located on SNECMA's present site. There he created truly innovative boats, with silk saiil, external ballast, aerodynamic hulls, with which he gained many international distinctions.

Caillebotte painted some 500 works in a style often more realistic than that of his Impressionist friends. The painter liked particularly views of Paris streets made from high balconies, painted many scenes of working life, landscapes of gardens and parks, and nautical scenes (on the Seine in Argenteuil and Yerres). His penchant for realistic painting, his vivid colour, and his treatment of light make him well a great Impressionist painter whose work is original and diverse.

Caillebotte donated his collection of paintings, in his will written in 1876, in these terms:
“I give to the French State the paintings which I have; nevertheless, since I want that this donation be accepted and in such a manner that the paintings go neither in an attic nor in a province museum, but well in the Luxembourg Museum and later in the Louvre Museum, it is necessary that a certain time passes before execution of this clause until the public, I do not say understand, but admit this new painting. This time may be twenty years at the maximum. Until then, my brother Martial, and at his defect another of my heirs, will preserve them. I request Renoir to be my executor...”

Caillebotte died in 1894 of an attack of apoplexy. The Academists, led by Gérôme, then tried to prevent the acceptance of Caillebotte’s legacy of Impressionist works in collection of the artistic inheritance of France, a stance supported by the Official Salon. A particular sticking point were works of Cézanne, which were seen to be worthless artistically. The Institute of France initially refused the Caillebotte legacy to the French National Museums.

In 1896, however, the French State authorised the National Museums to select some paintings of the embarrassing Caillebotte legacy, works which might be exhibited in the Musée du Luxembourg. They refused among these “drifts of an unhealthy art” 27 paintings out of the 67 of the collection and accepted: Seven pastels of Degas, eight Monets, six Renoirs, seven Pissarros, five Sisleys, two Cézannes and two Caillebottes (the last two added to the legacy by Martial Caillebotte, after the death of his brother).

These works were presented in an annex of the Musée du Luxembourg in 1897. The exhibition caused violent movements and a political scandal at the instigation of Gérôme and seventeen of his colleagues, members of the Institute. Thus the Senate became embroiled in this controversy. Nevertheless, it is Caillebotte’s legacy, which Renoir had the merit to impose to the French State after the death of the artist, that allowed France to have in its possession major works of Monet, Degas, Sisley and Renoir.

Most of the works of the legacy that were refused were repurchased by a certain Doctor Barnes whose collection of Impressionists is now envied by the French national museums (an exhibition of the Barnes Foundation took place at the Musée d’Orsay in 1993-94). The Caillebotte collection was integrated into the Louvre Museum only in 1928, and is today in the Musée d’Orsay.

“Les raboteurs de parquet” [The Floor Planers] above, is one of the first representations of urban proletariat. Whereas peasants (“Gleaners” by Millet) or country workers (“Stone Breakers” by Courbet) had often been shown, city workers had seldom been painted. Unlike Courbet or Millet, Caillebotte does not incorporate any social, moralising or a political message in his work. His thorough documentary study (gestures, tools, accessories) justifies his position among the most accomplished realists.

Caillebotte presented his painting at the 1875 Salon. The Jury, no doubt shocked by its crude realism, rejected it (some critics talked of “vulgar subject matter”). The young painter then decided to join the impressionists and presented his painting at the second exhibition of the group in 1876, where Degas exhibited his first “Ironers”. Critics were struck by this great modern tableau, Zola, in particular, although he condemned as a “painting that is so accurate that it makes it bourgeois”.
Posted by Intelliblog at 13:04