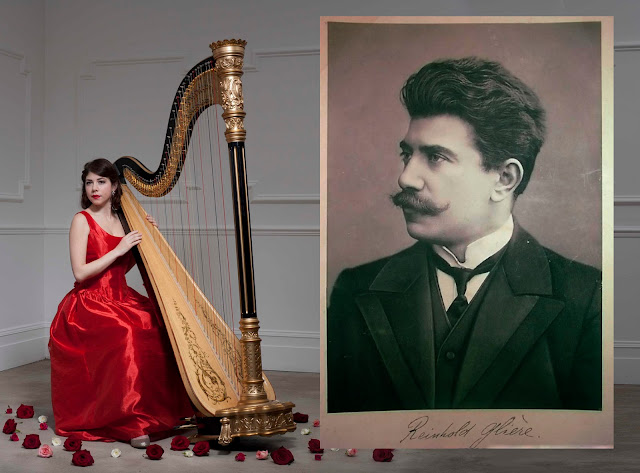 “Russia is a riddle wrapped in a mystery inside an enigma.” - Winston Churchill

Glière was the son of a musician and maker of wind instruments. He attended the Moscow Conservatory, where he studied violin, composition, and music theory with such notable composers as Sergey Taneyev, Anton Arensky, and Mikhail Ippolitov-Ivanov and from where he graduated in 1900. After teaching for a while in Moscow, he studied conducting in Berlin from 1905 to 1907, first appearing in Russia as a conductor in 1908, the same year his tone poem Sireny (“The Sirens”) was enthusiastically received. Glière taught at the Kiev Conservatory and was appointed director in 1914.

He returned to Moscow in 1920, taught at the conservatory there, and became involved in studying folk music, traveling widely to collect material. The opera Shakhsenem (first performed 1934) resulted from his study of the national music of Azerbaijan, and Uzbek elements appear in the opera Gyulsara (1936). Glière achieved a high status in the Soviet musical world after the Russian Revolution, largely because of his interest in national styles. He organised workers’ concerts and directed committees of the Moscow Union of Composers and Union of Soviet Composers.

At the end of the 20th century, Glière’s music was principally performed in countries formerly of the Soviet Union, although his ballet Krasny mak (1927; The Red Poppy) won wider international popularity for a time. Also well regarded were the ballet Medny vsadnik (1949; The Bronze Horseman) and his Symphony No. 3 (1909–11; Ilya Muromets). Although Glière was highly respected by many, his often politically motivated works—e.g., the overture 25 let Krasnoy Armii (1943; Twenty-five Years of the Red Army and Torzhestvennaya uvertyura (K 20-letiyu Oktyabrya) (1937; Solemn Overture for the 20th Anniversary of the October Revolution), were criticised by others for lack of depth and originality. Nevertheless, his influence on younger Soviet composers was profound. Among his pupils were Sergey Prokofiev, Nikolay Myaskovsky, and Aram Khachaturian.

Glière sought the technical advice of the harpist Ksenia Alexandrovna Erdely (1878-1971). She made so many suggestions that he offered to credit her as co-composer, but she declined. The work was published as the work of Glière as edited by Erdely. The music is immediately accessible although it breaks no new ground in terms of compositional techniques or technical demands on the solo harpist. It combines features that are redolent of both the Viennese classical style and Russian romantic nationalism.
Posted by Intelliblog at 17:50