MUSIC SATURDAY - A MASS BY ZELENKA 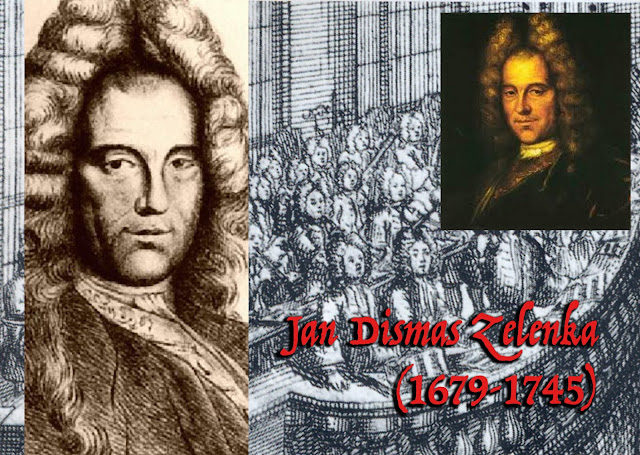 Jan Lukas Zelenka (later Jan Dismas Zelenka) was born in Loudovice, Bohemia in 1679 and was the son of an organist. He was educated at the Prague Jesuit College, with which he continued to remain in contact throughout his life. He moved to Dresden around 1710, where he became principal double-bass player of the Dresden Court Orchestra. Apart from a period of study in Vienna and periodic returns to Prague, and possibly a journey to Italy, Zelenka remained in Dresden for the rest of his life.

In 1697, the King-Elector Augustus the Strong of Saxony had assumed the Polish crown, a step that obliged him to adopt the Roman Catholic faith even though Saxony was predominantly Lutheran. Thus, the Royal Court at Dresden maintained two religious “faces”, on the one hand honouring strictly Lutheran Bach with the title of Royal Court Composer, and on the other hand bestowing on Zelenka the title of Court Composer of Church Music for his numerous sacred works composed for the Dresden Catholic Church.

Among Zelenka’s compositions there are numerous sacred works, including some 21 masses, psalms, and three oratorios with biblical subjects (totalling some 150 works in all) side by side with secular instrumental compositions reflecting his role in the Court Orchestra, of which he became conductor for five seasons.

Zelenka spent about two years in Vienna, where he studied counterpoint under Johann Josef Fux. He most probably composed four of his five Capriccios there (the final one being composed in 1729). During the Vienna years, no doubt under the influence of Fux, he gathered a sizable study collection of works by various composers written in strict contrapuntal style, which still survives in the Saxon State Library.

In 1719 Zelenka returned to Dresden, once again taking up his position in the Court Orchestra and resuming his sacred compositions. He continued with his inventory of contrapuntal works, fortunately including his own compositions, which has been a blessing to musicologists studying his output. 1723 was a particularly significant year for Zelenka. In this year the coronation took place in Prague of the Emperor Charles VI, an occasion for which the Jesuits had commissioned Zelenka to compose suitably festive music. Monarchs and princes from all the surrounding territories converged on Prague for the occasion, bringing their retinues and orchestras with them.

Zelenka conducted his own composition (Sub olea pacis; ZWV 175), the solo parts being sung by Czech noblemen. It was a glittering occasion, perhaps the high point of Zelenka’s career. He also composed four of his 10 instrumental works in 1723. Thereafter, Zelenka’s life in Dresden continued uneventfully, with further sacred compositions, some commissions from Bohemian noblemen, and no doubt some (undocumented) occasional visits to Prague.

He gradually took over the duties of the ailing court Capellmeister Heinichen (1683-1729), but he was not awarded this title after Heinichen's death. Instead, he received the royal title of Church Music Composer during the 1730s and was never well paid at Court. Bach, based in nearby Leipzig, was also awarded a similar Court Title at this time. A well-known and greatly respected visitor to Dresden, Bach was undoubtedly on familiar terms with all the musicians and musical personalities of Dresden, including Zelenka. Bach would often take his son Wilhelm Friedemann with him on his visits to Dresden; Bach in fact instructed his son to copy one of Zelenka’s works – the Amen from his third Magnificat (ZWV 108) – for use in Leipzig at St Thomas’s.

Zelenka’s music is always fresh and creative. His instrumental works often surprise the listener with sudden turns of harmony, and performers are often challenged by the demanding instrumentation. His choral works bear no relationship to those of Bach – indeed the two composers were writing for different religious traditions and idioms. Zelenka’s choral works are difficult to place in time; in his eclectic mix of drama, counterpoint, and depth of feeling one could almost be listening to a Schubert Mass. Here again, as in his instrumental works, listeners should expect the unexpected. The seven masses Zelenka wrote in his last 12 years (ZWV 16–21), at the age of 54–66, are generally regarded as some of his finest works. They may even have been the inspiration behind Bach’s drive to create a full-length Catholic mass (the B-minor mass) during his own final years.

Zelenka died in Dresden, of dropsy, on December 23, 1745. A few of his works have been lost over the years, but miraculously most of his autograph scores still remain intact in Dresden (with some score copies located elsewhere). It was only during the second half of the 1900s that Zelenka was truly “discovered”, and unlike many lesser treasures of the baroque (that might just as well have been left undiscovered), Zelenka’s music undoubtedly rewards further exploration. It would be true to say that his compositional output, both instrumental and sacred, has put a fresh face on baroque music.