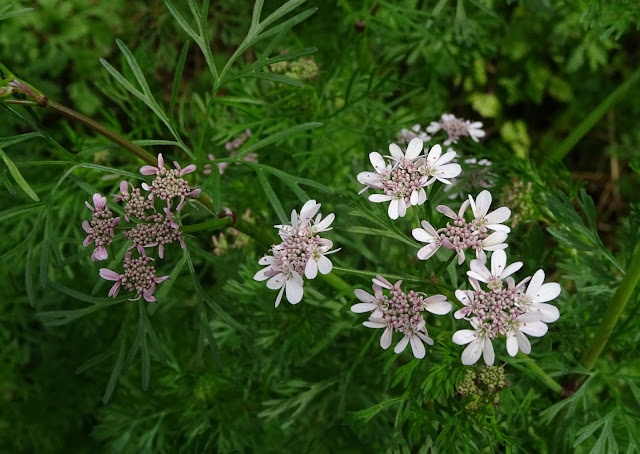 “If you’ve broken the eggs, you should make the omelette.” - Anthony Eden

Chervil (Anthriscus cerefolium), sometimes called garden chervil to distinguish it from similar plants also called chervil, or French parsley, is a delicate annual herb related to parsley. It is commonly used to season mild-flavoured dishes and is a constituent of the French herb mixture fines herbes.

A member of the Apiaceae family, chervil is native to the Caucasus but was spread by the Romans through most of Europe, where it is now naturalised. The plants grow to 40–70 cm, with tripinnate leaves that may be curly. The small white flowers form small umbels, 2.54–5 cm across. The fruit is about 1 cm long, oblong-ovoid with a slender, ridged beak.

Chervil is used, particularly in France, to season poultry, seafood, young spring vegetables (such as carrots), soups, and sauces. More delicate than parsley, it has a faint taste of liquorice or aniseed. Chervil is one of the four traditional French fines herbes, along with tarragon, chives, and parsley, which are essential to French cooking. Unlike the more pungent, robust herbs, thyme, rosemary, etc., which can take prolonged cooking, the fines herbes are added at the last minute, to salads, omelettes, and soups.

Chervil has had various uses in folk medicine. It was claimed to be useful as a digestive aid, for lowering high blood pressure, and, infused with vinegar, for curing hiccups. Besides its digestive properties, it is used as a mild stimulant. Chervil has also been implicated in “strimmer dermatitis”, or phytophotodermatitis, due to spray from weed trimmers and other forms of contact. Other plants in the family Apiaceae can have similar effects.

Transplanting chervil can be difficult, due to the long taproot. It prefers a cool and moist location; otherwise, it rapidly goes to seed (also known as bolting). It is usually grown as a cool-season crop, like lettuce, and should be planted in early spring and late fall or in a winter greenhouse. Regular harvesting of leaves also helps to prevent bolting. If plants bolt despite precautions, the plant can be periodically re-sown throughout the growing season, thus producing fresh plants as older plants bolt and go out of production. According to some, slugs are attracted to chervil and the plant is sometimes used to bait them.

In the language of flowers, chervil sprigs mean “sincerity; fine feelings”, while a flowerhead means “I appreciate your fine character”.

Method
Using a fork, beat the eggs, salt and pepper in a bowl until thoroughly mixed. Stir in the herbs. Heat half the oil and butter in a 25 cm nonstick skillet over high heat. When the oil and butter are hot, add half the egg mixture.
Stir continuously with a fork, shaking the pan, for about 2 minutes to create the smallest-possible curds. When most of the egg is solid, cook it without stirring for 10 seconds to create a thin skin on the underside. Roll the omelet by folding over one side and then the opposite site, and invert it onto a plate. Repeat with the remaining ingredients to make a second omelet. Cut each omelet in half.
Posted by Intelliblog at 18:17