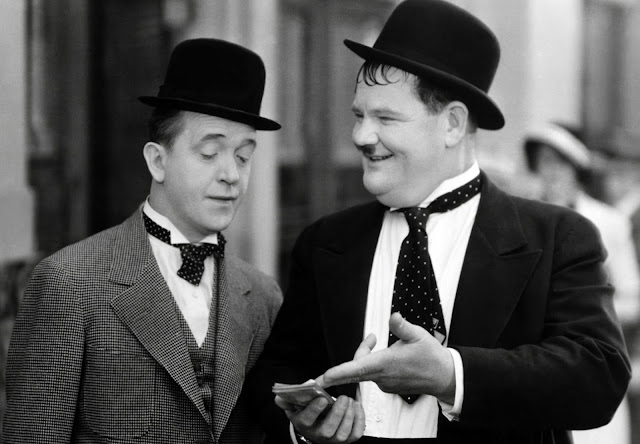 We all need to laugh and doing so does us the world of good. Laughter is a powerful antidote to anxiety, stress, pain, and conflict. Nothing works faster or more dependably to bring your mind and body back to normal than a good laugh. Humour lightens your burdens, inspires hopes, connects you to others, and keeps you grounded, focussed, and alert. With so much power to heal and renew, the ability to laugh easily and frequently is a tremendous resource for surmounting problems, enhancing relationships, and supporting both physical and emotional health. Laughter triggers healthy physical changes in the body. Humour and laughter strengthen your immune system, boost your energy, diminish pain, and protect you from the damaging effects of stress.

However, many people nowadays find it more and more difficult to have a really good laugh, allowing their problems to get the better of them and sometimes sinking into the depths of depression. Thus, it is no surprise that the comedy genre is popular in literature, film and TV. Speaking of TV, the canned laughter in TV-SitComs is a calculated ploy. Humour is infectious: The sound of roaring laughter is far more contagious than any cough, sniffle, or sneeze. When laughter is shared, it binds people together and increases happiness and intimacy. When you hear other people laugh you are more likely to also find funny whatever it is that makes them laugh.

Comedy is a narrative that has a series of funny or comical events, intended to make the audience laugh. It is a very open genre, and thus crosses over with many other genres on a frequent basis. Even a very serious and dramatic movie may have moments of comedy within it to lighten the mood and give the audience some comic relief. An emotional safety valve if you will. The various sub-genres of comedy are:

Comedy of Manners: This is a film satirising the manners and affectations of a social class, often represented by stock characters. The plot of the comedy is often concerned with an illicit love affair or some other scandal, but this is generally less important than the witty dialogue and embarrassing situations some of the characters find themselves in. This form of comedy has a long ancestry, dating back at least as far as Shakespeare’s “Much Ado about Nothing”. P.G. Wodehouse’s “Jeeves” series of books and the excellent 1990 TV Series adaptation “Jeeves and Wooster” with Stephen Fry and Hugh Laurie is a classic example of this genre.

Tall Tale: A humorous story with blatant exaggeration, swaggering heroes who do the impossible with nonchalance. Terry Gilliam’s 1988 “The Adventures of Baron Munchausen” is a classic example. It is an adaptation of German writer Rudolf Erich Raspe’s 1785 book: “Baron Munchausen’s Narrative of his Marvellous Travels and Campaigns in Russia.” I loved the film and it received positive reviews from critics, but unfortunately, it was a box office bomb!

Parody: A story that mocks or satirises other genres, people, fictional characters or works. Such works employ sarcasm, stereotyping, mockery of scenes, symbols or lines from other works, and the obviousness of meaning in a character’s actions. Such stories may be “affectionate parodies”, which merely mean to entertain those familiar with the source of the parody, or they may well be intended to undercut the respectability of the original inspiration for the parody by pointing out its flaws (the latter being closer to satire). Terry Gilliam’s and Terry Jones’s “Monty Python and the Holy Grail” of 1975 is an affectionate parody of the King Arthur epic movies.

Romantic Comedy aka RomCom: A sub-genre which combines the romance genre with comedy, focusing on two or more individuals as they discover and attempt to deal with their romantic love, attractions to each other. The stereotypical plot line follows the “boy-gets-girl”, “boy-loses-girl”, “boy gets girl back again” sequence. Naturally, there are innumerable variants to this plot (as well as new twists, such as reversing the gender roles in the story), and much of the generally lighthearted comedy lies in the social interactions and sexual tension between the characters, who very often either refuse to admit they are attracted to one another, or must deal with other’s meddling in their affairs. The plethora of movies in this genre attests to its great popularity with the paying public. Rob Reiner’s “When Harry Met Sally...” of 1989 is a good film of this genre.

Comic Fantasy: This is a sub-genre of fantasy that is primarily humorous in intent and tone. Usually set in imaginary worlds, comic fantasy often includes puns on and parodies of other works of fantasy. It is sometimes known as low fantasy in contrast to high fantasy, which is primarily serious in intent and tone. The term “low fantasy” is also used to represent other types of fantasy, so while comic fantasies may also correctly be classified as low fantasy, many examples of low fantasy are not comic in nature. Andrew Adamson’s and Vicky Jenson’s animated 2001 film “Shrek” is an example.

Comedy Horror: This is quite a popular genre and there are often elements of parody in this sub-genre. Mixing the spine-chilling effects and plot devices with comedy (often slapstick) greatly defuses the horrific with a belly laugh. Mel Brooks’ 1974 film “Young Frankenstein” is a good example. The 2009 Karyn Kusama film “Jennifer’s Body” is another one.

Black Comedy (or Dark Comedy): A parody or satirical story that is based on normally tragic or taboo subjects, including death, murder, suicide, illicit drugs and war. So-called “dead baby comedy” sometimes falls under this sub-genre. Peter Berg’s 1998 film “Very Bad Things” is a good example.

Zombie Comedy: Often called ZomCom or Zomedy, this is a genre that blends zombie horror motifs with slapstick comedy as well as dark comedy. Edgar Wright’s 2004 “Shaun of the Dead” falls in this sub-genre, or may even be considered a “RomZomCom” (a romantic ZomCom).

Comic Science Fiction: A comedy that uses science fiction elements or settings, often as a lighthearted (or occasionally vicious) parody  Garth Jennings’s 2005 film “The Hitchhiker's Guide to the Galaxy” is a film of this sub-genre.

So whatever sub-genre tickles your funny bone go forth and see films of that ilk, as laughter is good for you.
And what do you call an alligator in a vest?

An “investigator” of course!
Posted by Intelliblog at 20:51