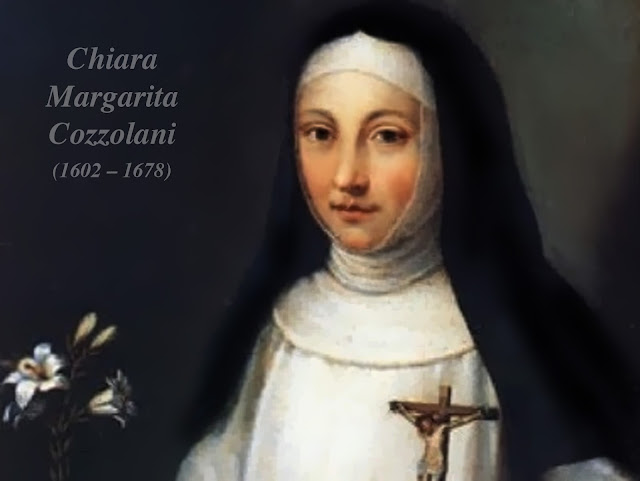 “I love you when you bow in your mosque, kneel in your temple, pray in your church. For you and I are sons of one religion, and it is the spirit.” - Khalil Gibran

Chiara Margarita Cozzolani (27 November 1602 – ca. 1676-1678), was a Baroque music composer, singer and Benedictine nun. She spent her adult life cloistered in the convent of Santa Radegonda, Milan, where she became abbess and stopped composing. She was one of more than a dozen cloistered women who published sacred music in seventeenth-century Italy.

Born into a wealthy family in Milan, Italy, Margarita Cozzolani entered the convent and took her vows in 1620. She added “Chiara” as her religious name. Her writings are very prolific, with some stylistic characteristics being the usage of sequences and switching modes. Her “Concerti Sacri” had followed suit in the Lombard style. Her four musical opere were published between 1640 and 1650, which is the date of her “Vespers”, perhaps her best-known single work. There is also a “Paschal Mass”. Her first publication, “Primavera di Fiori Musicali”, is lost.

In the convent of Santa Radegonda, the nuns sang during major religious feast days. This drew a great deal of attention from the outside world. As abbess of Santa Radegonda, Cozzolani defended the nuns’ music, which came under attack from Archbishop Alfonso Litta, who wanted to reform the convent by limiting the nuns’ practice of music and other contact with the outside world. The archbishop’s qualms could not have been reassured by the ecstatic report of Filippo Picinelli, in “Ateneo dei Letterati Milanesi” (Milan, 1670) who found that:

“The nuns of Santa Radegonda of Milan are gifted with such rare and exquisite talents in music that they are acknowledged to be the best singers of Italy. They wear the Cassinese habits of St. Benedict, but they seem to any listener to be white and melodious swans, who fill hearts with wonder, and spirit away tongues in their praise. Among these sisters, Donna Chiara Margarita Cozzolani merits the highest praise, Chiara in name but even more so in merit, and Margarita for her unusual and excellent nobility of invention...”.

Donna Chiara Margarita Cozzolani disappears from the convent’s records after 1676. The first modern edition of her complete motets, for one to five voices and continuo, appeared in 1998.