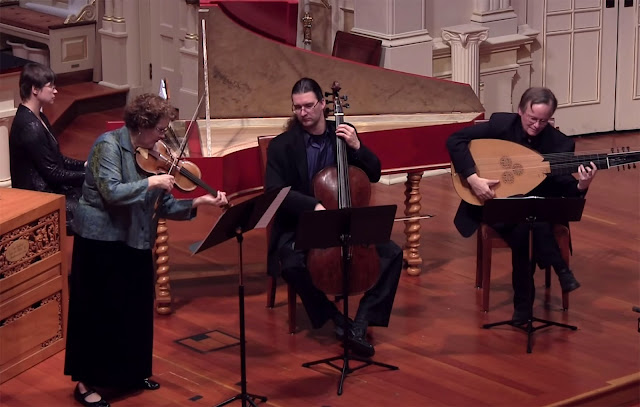 “Tell me what you listen to, and I’ll tell you who you are.” ― Tiffanie DeBartolo
Dario Castello (c. 1590 – c. 1658) was an Italian composer and instrumentalist from the early Baroque period who worked and published in Venice. As regards his instrument, it is not clear whether he played the cornetto or the bassoon. As a composer, he was a late member of the Venetian School and had a role in the transformation of the instrumental canzona into the sonata.

There is no biographical information about Castello. Even his exact birth and death dates are unknown. It is thought he may possibly have died during the great plague of 1630; certainly, he published no new music after this date. The title page of the 1629 edition of the first volume of the Sonate Concertate records him as Capo di Compagnia de Musichi d’Instrumenti da fiato in Venetia, indicating that he led a Venetian company of piffari, a band that could include trumpets, sackbuts, cornetts, shawms, bagpipes, drums, recorders and viols.

The title page of the second volume (1644 edition) of the “Sonate Concertate” lists him as Musico Della Serenissima Signoria di Venetia in S. Marco, & Capo di Compagnia de Instrumenti, indicating that he worked at the great Basilica of St. Mark’s where Claudio Monteverdi was maestro di capella. Castello’s use of the stile concitato (agitated style), with quick repeated-note figures, is consistent with his association with Monteverdi. There are records of other instrumentalists with the surname Castello working at St Mark’s, and it is possible they were relatives of Dario.

Of his music, 29 separate compositions survive. Castello’s music is inventive and technically challenging. Strictly worked polyphonic sections alternate with dramatic recitatives over basso continuo, in keeping with the title of the publications “in stil moderno”; however he also uses some of the older canzona technique, which uses short sections of highly contrasting texture, and active rather than lyrical melodic lines. Unusually for the time, Castello often specifies the instruments for each part, calling for cornetti, violins, sackbuts (Baroque trombone) and dulcians. That these works were still being reprinted in the 1650s attests to Castello’s influence. Modern editions of the complete sonatas are published by Ut Orpheus Edizione.

Baroque violinist Elizabeth Blumenstock performs the Sonata Prima of Dario Castello from his second book of instrumental music, published in Venice in 1629. This is Video from the Voices of Music Great Artists Series concert in San Francisco, January, 2012.


And here is the Sonata Decima and Sonata Sesta, with The Purcell Quartett.


And finally, the Sonata Quarta with the Accademia del Ricercare.