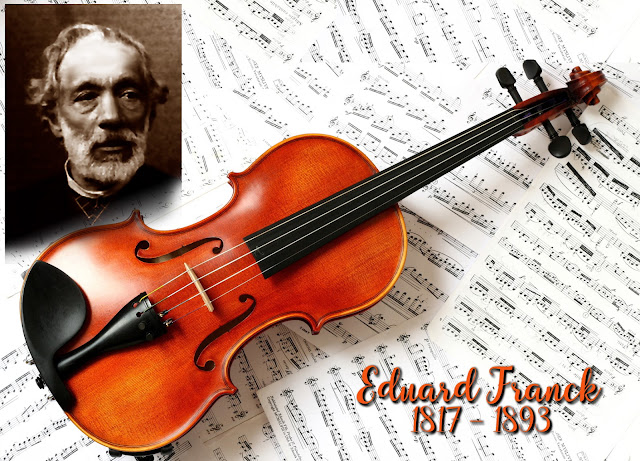 “There is nothing more to be said or to be done tonight, so hand me over my violin and let us try to forget for half an hour the miserable weather and the still more miserable ways of our fellowmen.” ― Arthur Conan Doyle
Eduard Franck (5 October 1817 – 1 December 1893) was a German composer, pianist and music pedagogue. Franck was born in Breslau, the capital of the Prussian province of Silesia. He was the fourth child of a wealthy and cultivated banker who exposed his children to the best and brightest that Germany had to offer. Frequenters to the Franck home included such luminaries as Heine, Humboldt, Heller, Mendelssohn, and Wagner. His family's financial position allowed Franck to study with Mendelssohn as a private student in Düsseldorf and later in Leipzig.
As a talented pianist, he embarked upon a dual career as a concert artist and teacher for more than four decades during the course of which he held many positions. Although he was highly regarded as both a teacher and performer, he never achieved the public recognition of his better known contemporaries such as Mendelssohn, Schumann or Liszt. As fine a pianist as the first two and perhaps even a better teacher, the fact that he failed to publish very many of his compositions until toward the end of his life, in part, explains why he was not better known.
Said to be a perfectionist, he continually delayed releasing his works until they were polished to his demanding standards. Schumann, among others, thought quite highly of the few works he did publish during the first part of his life. He was the father of Richard Franck (3 January 1858 – 22 January 1938) who was also a pianist, composer and teacher.
Eduard Franck’s chamber music is generally considered amongst his finest compositions. Of the works with opus numbers, there are 3 string quartets, 2 string quintets for 2 violins, 2 violas and cello, 2 string sextets, 4 piano trios, a piano quintet, 2 sonatas for cello & piano, and 4 sonatas for violin and piano. In addition to these, there are several other works without opus, including a piano sextet, 2 piano trios, a piano quintet, a sonata for violin & piano and an occasional piece for cello & piano.
Wilhelm Altmann, one of the most important chamber music critics of the 20th century, writes of Franck’s chamber music: “This excellent composer does not deserve the neglect with which he has been treated. He had a mastery of form and a lively imagination which is clearly reflected in the fine and attractive ideas one finds in his works.” Of Franck’s Second Sextet, Altmann states: “This sextet belongs in the concert hall. It demonstrates that its composer was master of musical form and in possession of a gift which allows him to produce strong and noble melodies.”
Here is his Violin Concerto in E-minor, Op.30, of 1855.
Mov. I: Allegro moderato 00:00
Mov. II: Andante con moto 16:39
Mov.III: Allegro molto vivace 26:08
Violin: Christiane Edinger Orchestra: Rundfunk-Sinfonieorchester Saarbrücken Conductor: Hans-Peter Frank.