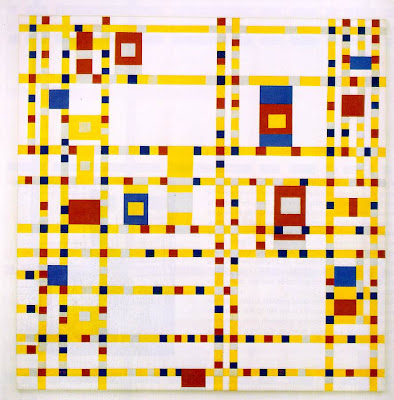 “The position of the artist if humble. He is essentially a channel.” - Piet Mondrian

Piet Mondrian  (1872-1944) was a Dutch neoplasticist painter who began his artist career painting landscapes, but soon moved to more abstract styles. After spending time in Paris before World War I, where he was influenced by cubism, he began to develop his own style of pure abstraction. His style, which he called neoplasticism, avoided both the reproduction of real objects or even filtered perceptions of real objects (as in impressionism). He refined his neoplastistic style during the 1920's, producing the abstractions with black lines and red, blue and yellow blocks for which he is best known.

Like many European artists and musicians of the early twentieth century, Mondrian left Europe for the United States during World War II and settled in New York, where he remained until his death in 1944. The works from his New York period, including Broadway Boogie Woogie (see above) and Victory Boogie Woogie (which was unfinished when he died) took his geometric abstractions in a different direction.
Posted by Intelliblog at 00:54