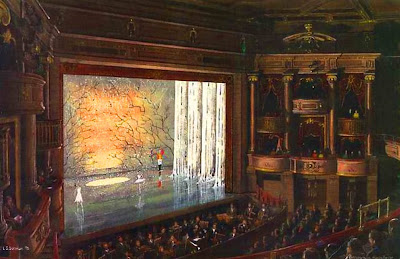 “Any subject is good for opera if the composer feels it so intently he must sing it out.” - Gian Carlo Menotti

We watched an opera on DVD yesterday and it proved to be quite a good production. The medium of the DVD certainly lends itself well to opera, with its great video and audio quality, but also with the action so well transported from stage to TV screen. The opera was Claudio Monteverdi’s (1567-1643) “Il Ritorno d’Ulisse in Patria” in Humphrey Burton’s version of 2002. The story is taken from Homer’s Odyssey and concerns the homecoming of Ulysses from the Trojan War.

Monteverdi can be justly considered one of the most powerful figures in the history of music. He was the first to write what we consider nowadays as opera. Monteverdi became known as a leading exponent of the modem approach to harmony and text expression. In 1607 his first opera, “Orfeo”, was produced in Mantua and it was followed by several more. In 1640, “Il Ritorno d’Ulisse in Patria” was composed. This was Monteverdi's first opera for Venice. The opera was very successful in Venice, where it had ten performances, and was then taken to the Teatro Castrovillani in Bologna.

The production in this DVD is French and playing the leads are: Kresimir Spicer as Ulisse, Marijana Mijanovic as Penelope, Cyril Auvity as Telemaco and Joseph Cornwell as Eumete. The settings are a little sparse, but one then tends to concentrate more on the music. Well worth seeing and listening to this!
Posted by Intelliblog at 01:29