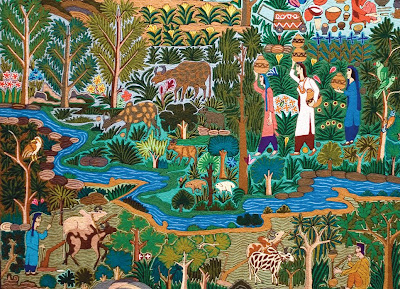 “It is only the farmer who faithfully plants seeds in the Spring, who reaps a harvest in the Autumn.” - B. C. Forbes

biodiversity |ˌbīōdiˈvərsitē|noun
The variety of life in the world or in a particular habitat or ecosystem.
ORIGIN from Greek bios ‘(course of) human life.’ The sense is extended in modern scientific usage to mean [organic life.] and from Old French diversite, from Latin diversitas, from diversus ‘diverse,’ past participle of divertere ‘turn aside’ (see divert ).

Today is World Biodiversity Day and the theme for 2008 is “Biodiversity and Agriculture”. Agriculture is a key example of how human activities have profound impacts on the ecosystems of our planet. This year’s theme for Biodiversity Day seeks to highlight the importance of sustainable agriculture not only to preserve biodiversity, but also to ensure that we will be able to feed the world, maintain agricultural livelihoods, and enhance human well being into the 21st century and beyond.

Biodiversity is the root of this plenty: the variety of crops and food on which human civilizations have grown and depend is possible because of the tremendous variety of life on Earth. If the Earth’s population is to feed itself in the 21st century and beyond, humankind needs to preserve the biodiversity that grants us our own complex and diverse lives. But biodiversity is diminishing at unprecedented rates. Over the past few hundred years humans have increased the rate of species extinction. Human drivers of change, including habitat loss, climate change and overexploitation of resources, have increased the rate at which species are going extinct by as much as 1,000 times background rates typical of Earth’s history.

Perhaps this is a good time to mention also that 2008 is the International Year of the Potato. This celebrates the Potato and will raise awareness of the importance of the potato - and of agriculture in general - in addressing issues of global concern, including hunger, poverty and threats to the environment.

Biodiversity is the variety of life: the different plants, animals and micro-organisms, their genes and the ecosystems of which they are a part. Australia is one of the most diverse countries on the planet. It is home to more than one million species of plants and animals, many of which are found nowhere else in the world. We are very much aware of the threat our increasingly urbanized environment is placing on different species of our country. The modern agricultural methods and the use of selected monospecies in high yield agricultural systes is another way of threatening biodiversity, while the introduction of exotic species into Australia has also threatened the local fauna.

There are several initiatives in Australia, which try to limit the threats we pose on or environment and which will help to preserve biodiversity. The priority actions are to: