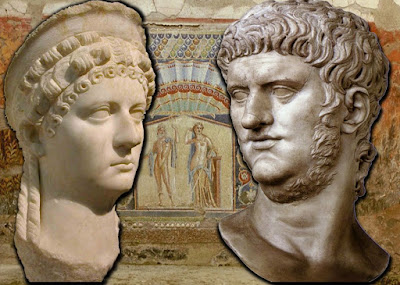 “Tell me whom you love and I will tell you who you are.” – Arsène Houssaye

“L' Incoronazione di Poppea” (SV 308, The Coronation of Poppaea, ≈1641-2) is a three-act opera in by Claudio Monteverdi to an Italian libretto by Giovanni Francesco Busenello. It was first performed in the Teatro Santi Giovanni e Paolo, Venice, in 1642. The opera is based on historical incidents as described by the Roman historian Tacitus.

Poppaea Sabina, the second wife of the Roman Emperor Nero, is the heroine (or anti-heroine?) of the plot. It begins with a prologue in which a conversation between Fortune, Virtue and Love as driving forces in Poppaea’s life affirms the power of love and promises Poppaea her heart’s desire – to become empress of Rome. The plot is full of irony and even though Nero and Poppaea are shown to be in love, Poppaea’s scheming and ambitious self-interest has been portrayed in a masterly way by both libretto and music.

Two pieces from the opera, for Music Saturday. The first is a triumphant aria by Poppaea after she learns that Seneca (the philosopher and objector to her liaison with Nero) has committed suicide after being ordered to kill himself by Nero. She now remarks joyfully that with Seneca dead, nothing will stop her from becoming Nero’s wife and empress.

The second aria is Arnalta’s lullaby. Arnalta is the old nurse and confidante of Poppaea, who sings this beautiful litlting melody as Poppaea falls asleep. In admiration, Arnalta praises Poppaea’s eyes. “If when closed they steal the viewer’s heart, imagine what they can do when they are open!” – she sings.

Enjoy your weekend!
Posted by Intelliblog at 02:41