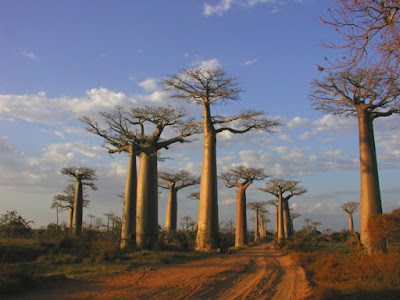 “Economic advance is not the same thing as human progress.” - John Clapham

Madagascar has always fascinated me. I remember in primary school during geography lessons looking at this huge island sitting in the ocean to the east of southern Africa and looking at the few pictures accompanying the sparse (yet intriguing) text in the geography book. Exotic names: Lemurs, baobab trees, chameleons, thorn trees… Fascinating yet alien, exotic but strangely inviting, faraway and yet seemingly so welcoming.

How did I remember it? My calendar says that today is Madagascar’s Independednce Day, celebrated since 1960. Madagascar is the world’s fourth largest island with an area of 600,000 square km, a population of 12 million, and home to the Malagasy Republic. The capital city is Antananarivo with Toamasina, Fianarantsoa, Toliara, Mahajanga and Antsiranana being other major cities. It was a French colony from 1896 until 1960 when it became independent. The landscape is richly varied with a high central plateau of arid scrub and savannah with deserts in the South. The East coast is hot, humid and covered by tropical rainforest. Little of the land is cultivated although most of the population are subsistence farmers. Cloves, vanilla, coffee, sugar, rice and cassava are the major products. Deforestation by a burgeoning timber industry is threatening this island’s unique flora and fauna.

The relatively recent animated Disney movie “Madagascar” (2005) may have alerted many people to the delights of Madagascar, but in these days of environmental destruction and threatened biosphere, this movie may be a timely reminder for the wholesale environmental ruination of a unique and wildly beautiful place in the world.

And for our Word Thursday, something apt:

lemur |ˈlēmər| noun
an arboreal primate with a pointed snout and typically a long tail, found only in Madagascar. Compare with flying lemur . • Lemuridae and other families, suborder Prosimii; includes also the sifaka, indri, and aye-aye.
ORIGIN late 18th century: Modern Latin, from Latin lemures (plural) ‘spirits of the dead’ (from its spectre-like face).
Posted by Intelliblog at 02:32