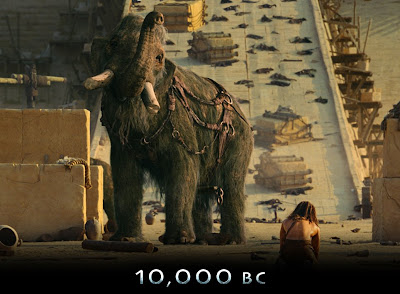 “If ridicule were employed to laugh men out of vice and folly, it might be of some use.” - Joseph Addison

I hate watching movies on planes, but sometimes it is something that I resort to after having worked on my computer a little, having read a little more, having solved some crosswords and having run out of power on my computer after working on it more. And when that is the case, the movie I usually choose is something light and escapist that requires the least concentration, as distractions are many and varied during the flight.

On the way back from Singapore, I watched the 2008 epic “10,000 BC”, directed by Roland Emmerich and starring Steven Strait and Camilla Belle. This is the perfect sort of movie to watch out of the corner of your eye while all sorts of other things are going on in the plane around you. Remember the ridiculous “One Million BC” of 1940, and the still more ridiculous “One Million Years BC” of 1966? Well, add to those two films, the sublimely ridiculous “10,000 BC” of 2008.

A group of Ice Age hunters (who we know didn't live in large groups), lives in Europe in a village (hmmm, remember your history saying they were nomads, they didn't live in permanent villages, right?), are spending winter in the mountains (that’s one of the reasons they were nomads, not to spend the winter up in the mountains!). They hunt for any mammoths that happen by chance to wander by, chasing them with spears and killing them with single spear throws! ( highly dubious). There is some supernatural mumbo-jumbo, a blue-eyed beauty who gets abducted by more civilised riders and a weakling who then decides to rescue the woman by tramping with his companions through East Asian bamboo jungles to sub-Saharan Africa and finally to what looks like ancient Egypt, over the course of a few weeks. Did I mention the mammoths were helping to build the pyramids? Or that people from Atlantis were running the show? I was expecting Santa Claus and the Martians to walk in at that stage.

The plot is weak to non-existent, the assumptions the audience is expected to make immense and the tolerance level of the viewer enormous. The acting is cheesy, the dialogue inane and the stone-age people sanitized beyond redemption. Some special effects and CGI attempt to make the movie appealing, but overall, a movie to watch while you’re not watching a movie on a long flight to while away the long hours. Otherwise, don’t bother!
Posted by Intelliblog at 01:19