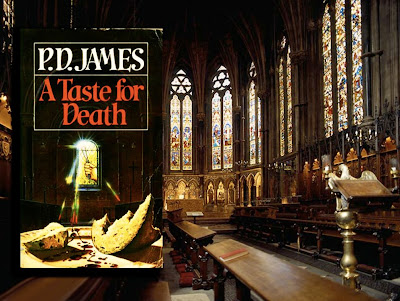 “Murder may pass unpunish'd for a time, But tardy justice will o'ertake the crime.” – John Dryden

For our literary Tuesday today I am reviewing a book that I read while on my holiday. It is the crime novel “A Taste for Death” by British writer P. D. James. This is the pen name of Phyllis Dorothy James, Baroness James of Holland Park, OBE, FRSA, FRSL (born 3 August 1920) who is a life peer in the British House of Lords. She only started writing when she was 30 years old and has written abut 20 books, including an autobiography, a science fiction novel and a mainstream novel. However, her forte is crime fiction, a genre that she excels in. Her investigator extraordinaire is Adam Dalgliesh of the New Scotland Yard, who also happens to be a poet. Her first Adam Dalgliesh novel “Cover her Face” was first published in 1962.

“A Taste for Death” (seventh in the Commander Adam Dalgliesh series) is a satisfying crime novel, but also a study in human character and a wry look at the complex motivating forces in people’s lives. One can often forget the crime in a PD James novel and rather concentrate on the characters’ emotions, psychology and ideas. PD James writes beautifully and her prose often lapses into a style that is more fitting to a “serious” novel, rather than the typical crime fiction. However, in this way she resembles the other “mistresses of crime fiction”, Agatha Christie, Ngaio Marsh and Ruth Rendell. This particular novel of James won the Silver Dagger in 1986, and has also been adapted for a 1988 UK television miniseries.

The plot of the novel revolves around the murder of an acquaintance of Commander Dalgliesh. In the dark and shabby vestry of St. Matthew's Church, Paddington, two bodies are found with their throats slashed with an old fashioned shaving razor. One of the victims is an alcoholic vagrant, and the other is Sir Paul Berowne, a baronet and recently resigned Minister of the Crown. Adam Dalgliesh investigates a convoluted murder case which involves both himself and his assistant, Inspector Kate Miskin in a web of intrigue and danger.

I can recommend PD James’ works and especially this one, so if you have not sampled her oeuvre, here’s my encouragement to do so. The style is relaxed, the narrative slow and deliberate, the action at sufficiently paced intervals to keep one’s interest up and the characters varied, believable, with great depth and complexity so as to keep the reader’s interest up.

Happy reading!
Posted by Intelliblog at 22:35