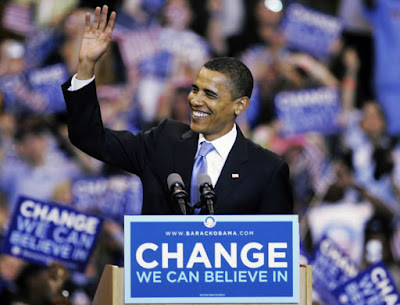 “It is as hard and severe a thing to be a true politician as to be truly moral.” - Francis Bacon

The US rejoices as Barack Obama is elected its 44th President. A historic victory that carries with it the euphoria of success and the defeat of pessimism. Scenes reminiscent f the election of JFK all those decades ago. A nation’s hopes are renewed as what had seemed an impossibility becomes reality. Is this a new age dawning in the US? Can this really be the signal of a new maturity, a nation that has come to terms with its internal conflicts? A new-found tolerance and an end to centuries of prejudice?

My cynicism of yesterday is momentarily forgotten as I let my optimism take over in order to compose a villanelle honouring this historic win:

The Time of Change

The time of change is here
Awake, renew, revise,
I feel the freshness near.

There is no need to fear,
Look up with cloudless eyes
The time of change is here.

Smile brightly then, my dear,
Gone are the endless sighs
I feel the freshness near.

Sweet songs again you hear,
The truth defeats all lies –
The time of change is here,

Wipe clean the frown and tear.
As darkness ebbs and dies,
I feel the freshness near…

As we defeat night drear,
Our hope will climb and rise;
The time of change is here
I feel the freshness near.

I do not envy Barack Obama as he is inheriting not only a nation in disarray, but also a world that has been damaged to a point almost beyond repair. There is much work ahead of him and many obstacles in his way. He already has many enemies and his position is tenuous. He has promised much and in order to deliver his promises he has to do much in such a short time. He will have power within his reach, but will he be allowed to use it for the good of his country and the world?
Posted by Intelliblog at 01:04