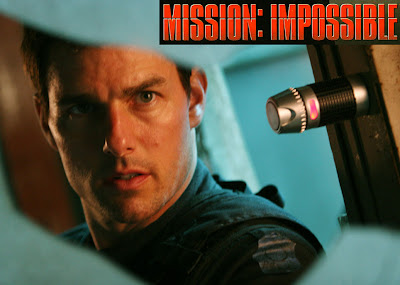 When I was young, I used to enjoy watching the 1960s TV series “Mission Impossible”. Just the sort of thing for a boy growing up in interesting times, where technology was beginning to impinge very seriously into our lives, where rockets were being fired into space, men walked on the moon, electronics was beginning to come into its own and where this particular TV series stimulated the imagination in a real hi-tech boys own adventure way. Jim Phelps (Peter Graves) as the head of a super-secret government agency (“Impossible Missions”) is given secret anonymous covert missions to complete. He and his team unmask criminals, rescue hostages and preserve the security of the nation. The vital ingredient on any Impossible Mission is that the mission must be carried out in top secrecy, often relying on high-tech equipment and elaborate deceptions…

As far as the movies were concerned, they were typical action-packed thrillers with loads of special effects, blood and gore, chases, fisticuffs, stylized violence, and high tech stories. However, that special (almost cerebral) thrill which was in evidence in the original TV series was lacking from these movies. Tom Cruise gave his usual pedestrian performance complete with stock set of facial expressions and the supporting cast was up to the thrill-seeker audience standard. The second in the series was interesting as most of it was shot in Sydney.

Finally, about the technology: An LCD screen, some decent speakers, an HDMI lead and a Blu-ray player can give you a superior movie viewing experience at home. Both LCD screens and Blu-ray players have come down sufficiently in price to be affordable. When I first saw a Blu-ray disc playing on a high quality LCD screen I was blown away by the picture and audio quality! The sound quality and picture detail were superb and the motion was rendered without pixelisation and jerkiness. Definitely worth the investment if you do a lot of movie watching at home. The Blu-ray discs are still expensive compared to DVDs, but they will come down in price as more and more people demand them. However, I must warn you, once you have watched a Blu-ray disc, it’s hard to go back to the old DVDs…