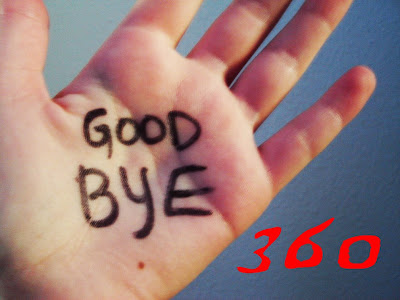 “No distance of place or lapse of time can lessen the friendship of those who are thoroughly persuaded of each other's worth.” - Robert Southey

Well it’s official, Yahoo 360 is closing down… I guess we could all see it coming for a long while, but now that it is official, it is easier to accept it and move on. I left the following comment on the Yahoo 360 Australia site:

“I am rather disappointed to see 360 go, although its steady decline over the past couple of years, frequent bugs, lack of technical support, rumour-mongering amongst its users, and their progressive exodus have foreshadowed this announcement.

I first started blogging here on 23/3/06 and since then have produced a daily blog. I have met many fine people on 360, have exercised my mind, have been moved, have laughed, and have been creative. It will be hard to say goodbye, but such is the way of the world. Nothing is permanent, all is in a state of flux, all changes (as Heraclitus has said...).

I for one will not move to Profiles, it is a sad and poor relative of 360 (just like Mash was). I shall be changing my home page from Yahoo to something else (Google?). Whether I continue to blog or not once 360 goes, I have not decided yet.

It is appropriate to thank Yahoo at this stage for having created one of the best blogging sites on the net. In its heyday it was elegant, simple, well-supported, popular, ground-breaking. In its decline it has retained the quiet and melancholy dignity of a beautiful corpse.