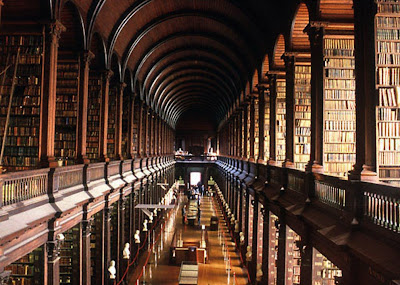 “To add a library to a house is to give that house a soul.” - Cicero

The history of civilisation walks hand in hand with the history of writing. It is no accident that as soon as writing evolved, the storage and safe-keeping of written records became a concern for the budding civilised states. A hoard of about 30,000 clay tablets found in ancient Mesopotamia date back more than 5,000 years. Papyrus scrolls from 1300-1200 BCE have been discovered in the ancient Egyptian cities of Amarna and Thebes, and thousands of clay tablets in the palace of King Sennacherib (Assyrian ruler from 704-681 BCE), were discovered by archaologists at Nineveh, his capital city.

“Library” is the name for these repositories of written records. Libraries have developed concurrently with the development of permanent storage media on which information has been stored. Whether it is clay tablets, papyrus scrolls, tablets of wood, sheets of parchment or paper; and whether the collections of these records have been private or public, libraries have been founded, built, destroyed and rebuilt. The library as an institution has survived for thousands of years, well into our digital age where the printed medium of the book is presently under attack. The survival of the library is a testament to the value humans place on knowledge and its transmission within populations, horizontally amongst individuals, but also vertically, through time.

The earliest libraries may have been in the Near East, but the ancient Greeks propelled the idea of the library as a cultural and civilising institution through their heightened interest in literacy and intellectual life. Public and private libraries flourished through a well-established process: Authors wrote on a variety of subjects, while scriptoria or copy shops produced the copies of the books, and book dealers sold them. Though the public library first appeared by the fourth century BCE, the private library was more prevalent, and older.

The greatest and most well-known library of all time was the Great Library of Alexandria, a public library founded about 300 BCE and open to all with the proper scholarly and literary qualifications. When Egypt’s King Ptolemy I (305-282 BCE) asked, “How many scrolls do we have?” the librarian, Aristotle’s disciple Demetrius of Phalerum was on hand to answer with the latest count. After all, it was Demetrius who suggested setting up a universal library to hold copies of all the books in the world translated into Greek.

The Alexandrian library's lofty goal was to collect half-million scrolls and the Ptolemies took serious steps to accomplish it. Ptolemy I, for example, composed a letter to all the sovereigns and governors he knew, imploring them “not to hesitate to send him works by authors of every kind”. At its height, the library held nearly 750,000 scrolls. Much of what is now considered to be literary scholarship began in the Alexandrian Library. Funds from the royal treasury paid the chief librarian and his scholarly staff. Physically, books were not what we think of today, but rather scrolls, mostly made of papyrus, but sometimes of leather. They were kept in pigeonholes with titles written on wooden tags hung from their outer ends.

Fires and depredations during the Roman period gradually destroyed the Library. When Julius Caesar occupied Alexandria in 48 BCE, Cleopatra urged him to help himself to the books. Obliging, he shipped tens of thousands to Rome. Mark Antony was rumored to have given Cleopatra the 200,000-scroll collection of rival library Pergamum to replace Alexandria's losses. Thanks to the Great Library, Alexandria assumed its position as the intellectual capital of the world and provided a model for other libraries to follow. Christian and Arab invasions eventually destroyed this jewel of ancient civilisation with the scrolls from the library being burned in the public baths to heat water, there being enough books for fuelling the boilers for six months.

Rome’s Vatican Library is one of the richest manuscript repositories in the world, with more than 65,000 manuscripts and more than 900,000 printed volumes. Most works are in either Latin or Greek. By the middle of the second century BCE, Rome also boasted rich library resources. Initially they comprised some scattered private collections, but holdings eventually expanded through the spoils of war. Even Aristotle’s famed collection was among the bounty.

To serve as director of a library was a great honour. The role became a stepping stone for the ambitious government servant. Staff consisted of slaves and freedmen, who were assigned to either the Greek or the Latin section. Educated slaves fetched rolls from the systematically arranged and tagged bookcases and returned them to their place when the user had finished with them. They usually transported the rolls in leather or wood buckets. Scribes made copies to be added to the collection and recopied damaged rolls, while keeping the catalog up to date. Libraries were typically open during standard business hours - sunrise to midday. However, they remained the domain of the learned: Teachers, scientists, scholars.

As the Roman Empire crumbled, the libraries began to close. In 378 CE, the historian Ammianus Marcellinus commented, “The libraries are closing forever, like tombs.” As the Roman Empire fell, libraries seemed doomed to extinction. However, sparked by the spread of Christianity, the eastern half of the empire did much to foster the use of libraries. The capital city of Constantinople had three major libraries: The university library, the library for the royal family and civil service, and a theological collection. The Christian tradition and the monasteries revived the library in the West. The Benedictines created libraries, and the scriptorium became a sacred place. It soon became customary for monasteries to lend to other monasteries, giving birth to the inter-library loan. Charlemagne, who owned a robust library in Aachen in the eighth century, ordered every school to have a scriptorium. The road was well paved to invite the Renaissance and a new age for libraries.

The invention of printing through Johannes Gutenberg's movable type innovation in the 1400s revolutionised bookmaking. Printed books replaced handwritten manuscripts and the new books were placed on open shelves. Throughout the 1600s and 1700s, libraries surged in popularity. They grew as universities developed and as national, state-supported collections began to appear. Many of these became national libraries. As the industrial revolution swept through the world and increased urbanisation led to the rise of the middle class, the public library came into being and the university libraries expanded their collections and scope of services to accommodate the burgeoning of new knowledge.

Libraries may have changed over the years (no longer do we store scrolls in pigeon holes), but the need for a repository of knowledge remains. The digital revolution may be changing our ideas of what a “book” is and how we read may be need to be rethought in the near future. However, the library has withstood attacks of barbarians and religious fundamentalists, has had to reinvent itself several times through several technological advances and changing incarnations of “books”, and has survived. As an institution the library continues to educate, inspire and civilise. I am hopeful that this will only continue and improve with the passage f time.
Posted by Intelliblog at 02:43