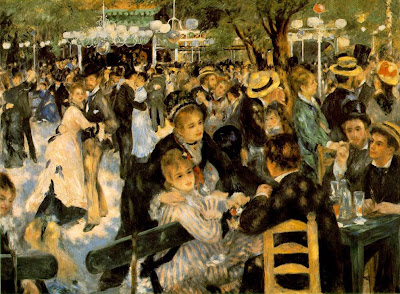 “Why shouldn't art be pretty? There are enough unpleasant things in the world.” – Pierre Auguste Renoir
Pierre-Auguste Renoir (1841-1919) was a famous French impressionist painter, associated with the Impressionism movement along with his friends Claude Monet, Alfred Sisley, and Frédéric Bazille. Renoir was born in Limoges, Haute-Vienne, France, on February 25, 1841 as a child of a working class family. Renoir’s first encounter with painting dates from his childhood. Later, he worked in a porcelain factory where his drawing talent led to him painting designs on china.

From the beginning in early 1860s when Renoir started studying art under Charles Gleyre in Paris, when he didn't have enough money to buy paint, to his last day when rheumatoid arthritis severely hampered his movement and he was forced to paint by strapping a brush to his arm, and created sculptures by directing an assistant who worked the clay, Renoir's painting was always beautiful and optimistic. So was his view of life and his painful condition: “The pain passes, but the beauty remains” were Renoir's words.

Renoir's paintings are probably the most popular, well-known, and frequently reproduced images in the history of art. Almost everybody has heard of the Bathers, The Umbrellas, Luncheon of the Boating Party and one of the most expensive paintings ever, Le Moulin de la Galette along with many other. They present a vision of a forgotten world, full of sparkling colour and light.

The “Moulin de la Galette” (“Flour Mill”, shown above) of 1876 was one of 21 works shown by Renoir at the third Impressionist exhibition in 1877. Every Sunday afternoon young people from the north of Paris contributed in the dance-hall and in the courtyard behind it in fine weather. Most of the figures in Renoir's work, rather than being habitués of the Moulin were in fact portraits of his friends, with the occasional professional model posing for thin. The scene which Renoir has painted in this work is not an authentic representation of the clientele of the Moulin, but rather a scrupulously organised series of portraits.

The writer Georges Rivière, who knew Renoir well at this time, and is himself included in the painting as one of the three foreground gallant drinking at the table, in his review of the work in the journal “L' Impressionniste “which accompanied exhibition referred to it as a page of history, a precious and strictly accurate portrayal of Parisian life. That he should have stressed its realism is odd knowing the very painstaking working method Renoir had adopted.
Posted by Intelliblog at 01:03