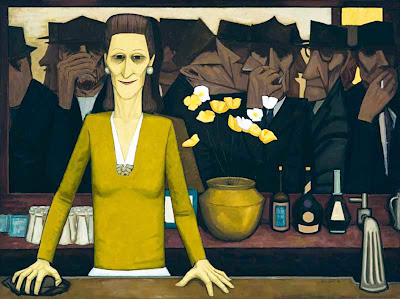 “Science and art belong to the whole world, and before them vanish the barriers of nationality.” – Goethe

Today is officially the first day of Winter in the Southern Hemisphere, as it marks the Winter Solstice, when the sun has reached its Northernmost point in the sky at noon, and hence we see the shortest day and the longest night of the year. The sun rose at 7:35 am and set at 5:08 pm today, a short day of just over nine hours. The days will begin to get progressively longer from tomorrow and the nights shorter. The day was cool, but not excessively cold and we did have some showers now and then – no rain, however!

We went to the Ian Potter Gallery today, and we thoroughly enjoyed it. Rather than try and look at all of the exhibits, we chose to simply concentrate on a couple of wings of the gallery only and these were the special exhibitions area and the Indigenous Art exhibit hall. The latter is a gallery filled with mostly Aboriginal art works: Paintings on bark and on canvas, sculptures, some basketwork and a few drawings. The variety of works was quite extensive and one could happily spend several hours looking at all of these treasures.

However, we moved on to the special exhibitions area where a John Brack (1920-1999) retrospective exhibition is currently being held (24/4/09-9/8/09). This is the first John Brack retrospective to be held in more than twenty years and surveys the artist’s complete work, including drawing, painting and all of his major series. The gallery is showcasing its latest Brack acquisition, “The Bar” (1954) bought for $3.2 million (see illustration).

“The Bar” was Brack’s largest oil painting at the time he painted it. Considered radical for its time, “The Bar” presents a stark view of life in Melbourne suburbia, the infamous ‘six o’clock swill’ as patrons hurry to finish their drinks before early closing time. It is also an ironic parody of Edouard Manet’s important 1881 work, “A Bar at the Folies-Bergère”. Brack’s “Collins St., 5p.m.” was completed a year later in 1955 and purchased by the NGV in 1956. Like “The Bar”, “Collins St., 5 p.m.” exemplifies the style for which Brack is renowned.

The exhibition was well worth seeing and the iconic nature of many of these paintings bring to mind some pages of Australian history, values, personalities and the Australian psyche.