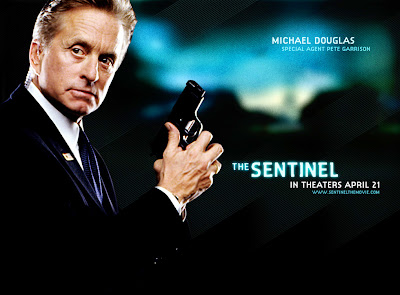 “If the cinema is any kind of force for social change, then it's a force for the bad, because most films are about one guy with a gun solving a problem.” – Ken Loach

At the weekend just been we watched a typical Hollywood film. I had heard nothing about it, but the big names attracted me to it: Michael Douglas, Kiefer Sutherland, Kim Basinger, Eva Longoria, etc, etc. The 2006 Clark Johnson film is “The Sentinel”. The film is formulaic and slickly made, the acting is borderline competent and the story is predictable. I expected more action and car chases, but the film was more of a blood and guts, shoot ‘em up type. In fact, if you like violence and get off on seeing people getting shot, you would probably enjoy the movie.

As far as the plot is concerned: American secret service veteran agent Pete Garrison saved the life of president Ronald Reagan in the past and became a legend. Years later, he is responsible for the personal security of the American president Ballentine and the first lady Sarah Ballentine. Garrison is having a love affair with the first lady. Walter, Garrison’s informer discloses that there is a traitor in the secret service and a plot to kill the president (by neo-Nazis or Russians or Communists – who knows? Bad guys, I guess). David Breckinridge, who used to be Garrison’s best friend, and the chief of the secret service, William Montrose, are put in charge of the investigation. All the agents are submitted to a polygraph test, which Garrison fails because of his involvement with the first lady. As a result he is accused of treachery and is apprehended. He escapes and conducts his own investigation trying to find who is the mole all the while being pursued by the secret service, his former friends.

Now that I’ve written out the plot I’ve realised how ridiculous it all is. “The Sentinel” is representative of the present-day decadent Hollywood mass-produced movie and displays the trashy lack of imagination present in so many movies nowadays. The film is generic, contrived and lazily put together. It is a film that depends on the big names as drawing cards, on an efficient marketing and advertising machine and hordes of pap-consuming public that have been trained to consume such films.

A film about an assassination plot of a president could be riveting stuff if well made and directed. However, this one is uninspired and the direction is flat and gives the impression that Clark Johnson was very bored when he was making it (he probably was). Eva Longoria’s role was so underdeveloped that it was inevitable to suppose that she was just a token pretty face, the token woman in the secret service – she hardly had any lines to speak! The affair between the first lady and Garrison was left unresolved and the president is depicted as a complete cretin. The real mole was spottable ten minutes into the movie and there were some terrible stereotypes in it. My advice is, avoid wasting your time seeing it!
Posted by Intelliblog at 22:04