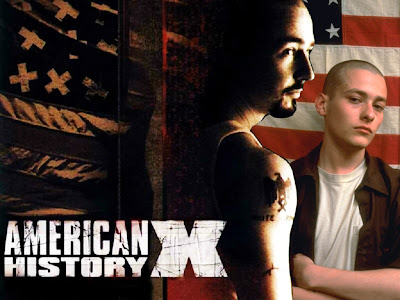 “A rattlesnake, if cornered will become so angry it will bite itself. That is exactly what the harboring of hate and resentment against others is - a biting of oneself. We think we are harming others in holding these spites and hates, but the deeper harm is to ourselves.” E. Stanley Jones

At the weekend we saw Tony Kaye’s 1998 film “American History X”, which we had resisted watching up until now as we had been told that it was a very violent movie. Subsequent to that I had two friends whose judgment I trust tell me that this was an excellent movie and well worth watching, despite the violence, strong themes and foul language. Being in a suitably prepared mood, we watched this film last Saturday and I must confess that we found all of the things we had heard about were true: Yes, it is very violent; yes, it has confronting themes; yes, it had foul language; but yes, it was also a powerful and important movie that looked at some of issues that are relevant today not only in the USA, but in most countries of the Western world.

The casting was excellent and all actors played their part exceptionally well, but most importantly, Edward Norton and Edward Furlong, as the two brothers, Derek and Danny Vinyard gave award-winning performances. Beverley D’ Angelo, Avery Brooks, Jennifer Lien, Ethan Suplee and Elliot Gould also give great supporting performances. The result is a gut-wrenching, moving film about self-discovery and redemption, but at a terrible price.

The plot centres on Derek Vinyard, a brutal Neo Nazi skinhead who is tried and sent to prison for three years for the murder of two black men who tried to steal his truck. In prison he discovers that things are not always what they seem, and reformed, returns home to try and salvage his family. His younger brother Daniel Vinyard who idolises him, is on the brink of following in Derek’s footsteps. The relationship between the two brothers becomes strained as Derek tries to save his younger brother from a fate similar to his own.

Tony Kaye’s direction is a little conventional at first, but even then, never hackneyed. As the film builds up to its climax, subtlety and innovation become apparent and the viewer is drawn into the drama with a style that builds the tension and erupts into an ending that is both apocalyptic and immensely crushing. The sheer brutality of some of the scenes of the film are quite graphic and will shock many viewers. However, the most sad thing about it is that these are everyday crimes that are occurring even now. The film contains scenes of sex, violence, murder, rape, references to drug use, racial vilification, foul language and yet all of this is relevant to the theme and the plot. Not for the faint-hearted, but it is a film for people with a heart.

I do recommend that you see this movie if you haven’t seen it, but prepare to be shocked and moved, enraged and confronted by powerful themes. The emotional response that it evokes is strong and it is done in a way that caters to the intelligence and critical review of the watcher.
Posted by Intelliblog at 01:27