A HOMELY SCENE BY HOOCH 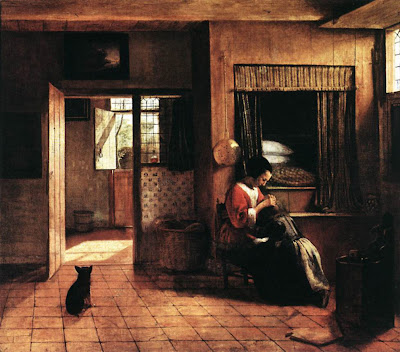 “Home is a place not only of strong affections, but of entire unreserve; it is life's undress rehearsal, its backroom, its dressing room.” - Harriet Beecher Stowe

When I was young and we were living in Greece, I remember spending summer holidays at my grandparents’ place. These were some of the most idyllic and happy times of my life. I was carefree and spoilt, used to play with the neighbourhood children and I adored my grandfather, especially. There was a garden with fruit trees and vines, a flat roof with a little storeroom at the back of it where I found bundles of old magazines that I read in the summer afternoons when everyone else took their siesta and nearby fields where I went exploring.

One of the things I remember about their house was that there was a series of Dutch Master prints hanging in the walls of the hallway. One of those always fascinated me and I used to look at it often and was drawn into its quiet mystery. It always seemed to me that if I looked at it long enough and willed hard enough I would somehow be transported into the painting and explore its mysteries. Once we moved and after my grandparents died, it was many years before I saw those paintings again.

As far as my favourite mysterious painting is concerned, it was “The Mother” by Pieter de Hooch, painted about 1660. I encountered the original of this when I was living in Amsterdam and visited the Rijksmuseum. This museum became one of my haunts and every couple of days I used to visit it in order to immerse myself in its treasures. The de Hooch painting is fairly small, 52.5 x 61 cm, but nevertheless it exerted on me the same magic as it did in my childhood. The immediate comparison one may make is with the paintings of Vermeer, another Dutch master of the Golden Age of Dutch painting.

Pieter de Hooch (1629-1684) has gone down in art history as a painter who rendered Dutch domestic life with great precision and verisimilitude. The everyday life of the bourgeoisie in all its ordered tranquillity and its private moments, is the subject of his works. He depicts a world whose calm is never shattered by any sensational event and the scenes he chooses to immortalize are curiously familiar, timeless. De Hooch opens a window on narrow alleyways, small gardens and courtyards, and gives us a glimpse into the antechambers and living-rooms of the Dutch citizens. Like Jan Vermeer, de Hooch specialized in the portrayal of interiors.

However, the paintings of Vermeer centre on a self-absorbed figure pausing momentarily in some activity, while de Hooch's paintings are dominated by the room itself, by its perspectives and views through doors and windows where people become an integral part of the interior. Light is an important factor, especially daylight, as in the work of Vermeer, with its refractions and reflections adding vitality to the rooms. Whereas people and animals interpose in their activities, light itself becomes the active element, permeating and moving over walls, floors and tiles, illuminating objects or casting them in shadow. This depiction of figures immersed in light, whether indoors or outdoors is what makes de Hooch’s painting luminous and deep.

The painting above shows a mother checking the hair of her child for lice. A very mundane theme, but a beautifully rendered painting bathed in warm golden light. The homely touch of the pet dog looking out towards the spring garden and the patch of sunlight on the floor, attract the eye outward towards that beautiful landscape visible through the half-open door. The bed warmer and the heavily curtained bed ensconced in its own little niche (a room within a room) hint at the heavy winter that has passed. The child is squirming, eager for the ritual of the louse hunt to finish so it can go and play with the dog in the sunshine outside. A gem of a painting, ordinary and yet extraordinary in its directness and simplicity. Quite charming!

Hope you had a good weekend, enjoy the week ahead!
Posted by Intelliblog at 01:23