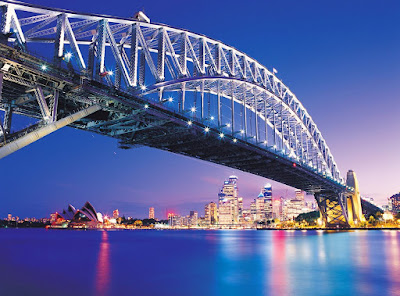 “Who can hope to be safe? who sufficiently cautious? Guard himself as he may, every moment's an ambush.” - Horace

I was in Sydney for the day today, so another early morning flight and then back home with an evening one. So, one more long day, but once again worthwhile as its results were good beyond expectation. We had a government regulator audit to survive at our Sydney Campus, but instead of the expected problems that had foreseen, the auditors were most complimentary and identified many of the things we do as examples of “best practice”. This was most satisfying and it certainly was great encouragement for my team who worked so hard to get it all right. It was so good to see the delight in everyone’s eyes when the auditors delivered their verdict and said they recommended that we pass with flying colours!

Sydney weather was quite variable today and what started out as a sunny day ended up rainy. I took my team out to lunch, seeing how the audit was going so well and we wanted a little celebration. We had a delicious repast at one of the area’s good Italian restaurants. There was chicken schnitzel with a seasoned crumbed coating and mustard sauce on mashed potato with rocket salad, barramundi fillets with butter lemon sauce and spring vegetables, a chicken Caesar salad with crispy bacon and foccacias of various kinds, followed by wonderfully aromatic, strong Italian coffee. We managed to evade the rain and then walked back and finished with the audit.

After we had finished and got the good news, I took the train to the airport (how convenient and sensible it is to have a train station right at the airport!) and almost met a colleague at the airport, however, our planes were leaving at different terminals and the times just weren’t conducive to us meeting in the end. As I was going to the terminal where my plane was leaving, I was crossing the road at a pedestrian crossing and was nearly run over by a limousine taxi, which didn’t stop at the crossing. I was clipped on the side and nearly fell over, but managed to hang on and even though my knee was banged and my wrist was sprained, nothing else was injured. The car stopped and the driver was quite distressed, whereas I was rather relieved that I didn’t break anything, or worse… At least the car was a Mercedes and if one gets run over, it may as well be in style.

An eventful day, again and as the saying goes, “never a dull moment”!

audit |ˈôdit| noun
an official inspection of an individual's or organisation's accounts, typically by an independent body.
• a systematic review or assessment of something: A complete audit of flora and fauna at the site.
verb ( -dited , -diting ) [ trans. ]
1 conduct an official financial examination of (an individual's or organization's accounts): Companies must have their accounts audited.
• conduct a systematic review of: Auditing obstetrical and neonatal care.
2 attend (a class) informally, not for academic credit.
ORIGIN late Middle English : from Latin auditus ‘hearing,’ from audire ‘hear,’ in medieval Latin auditus (compoti) ‘audit (of an account),’ an audit originally being presented orally.

Jacqui BB is hosting Word Thursday!
Posted by Intelliblog at 02:06