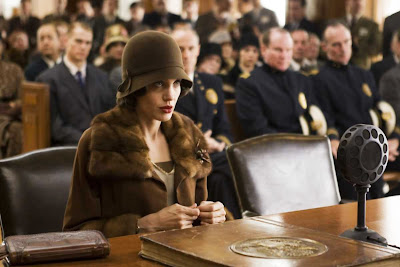 "The desolation and terror of, for the first time, realising that the mother can lose you, or you her, and your own abysmal loneliness and helplessness without her. " - Francis Thompson

Yesterday we watched the 2008 Clint Eastwood film, “Changeling”. It starred Angelina Jolie, John Malkovich, Frank Wood, Colm Feore and Michael Kelly. The film was based on a true story, upon which J. Michael Straczynski, based his screenplay (and a fine one it was). Eastwood directs well, although in some cases too heavy-handedly, with Jolie pumping out the emotion almost non-stop. However, overall the film is well-shot, well-acted and well-directed.

The movie is set in Los Angeles in the 1920s. Christine Collins (Jolie) is a telephone operator supervisor who must work on a Saturday as an emergency has arisen at the office. She leaves her young son Walter alone at home, only for a shot while as her friends and neighbours will pop in and see to him. When she returns in the afternoon, she discovers him missing. The police to whom she turns are corrupt and ineffectual. For months, Christine is trying to find her son, while the police finally return a child to her, who they say is Walter. Christine knows he is not, but the police department needing good publicity force the child on her.

The remainder of the film deals with Christine’s battle with the LAPD personified by Captain JJ Jones (Jeffrey Donovan), a corrupt and unscrupulous cop on the take. She is put into a mental asylum and has to deal with the horrific discovery that a psychopath may have abducted her son. Her only ally in her battle against the LAPD is the Reverend Gustav Briegleb (Malkovich), who is also a crusader for honesty and good morals.

The sets and costumes are perfect, with the beautiful Model T Fords, the red electric street cars, the telephones, the switchboard station with roller-skating supervisors, the house appliances, and the authentically styled clothing, from dresses to hats to police uniforms, hairdressing, everything is detailed and accurate. The music is appropriate and once again in tune with the theme and period. What surprised me even more was that the talented Mr Eastwood composed it!

The film has similar themes to others directed by Eastwood. It concerns itself with truth and lies, and exposing the hypocrisy of people whose duty is to protect truth, honour and justice. “Unforgiven” and “Flags of our Fathers” come to mind as films that Eastwood directed and have a similar set of themes. Jolie and Malkovich carry the film. Jolie acts with fervour and emotional intensity and proves that she can do “serious” acting. Malkovich, whom I often find annoying, was surprisingly good in this uncharacteristic “good guy” role.

The film is challenging to watch and has some very confronting and poignant scenes, as well as dealing with some complex themes. It was a long and at times harrowing film, but nevertheless one well worth seeing.
Posted by Intelliblog at 01:14