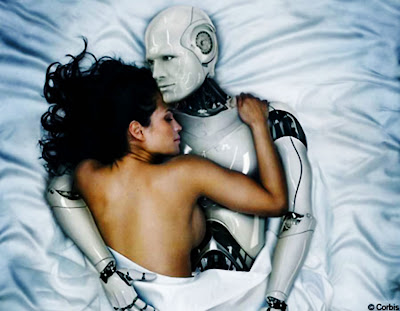 It appears that the pace of technological and scientific development is ever-increasing. In ten years time the number of new developments will have greatly surpassed all that was developed in the past 50 years. New technology gives us the technology to advance even further into the realms of what we now consider science fiction.

The subject of robots has fascinated humans from ancient times. The ancient Greeks had many myths and legends about robots, one of the most famous being that of the guardian robot of Crete, Talos. Talos was a giant, bronze automaton made by the divine smith Hephaistos. Zeus the king of the gods, presented Talos to his lover Europa, as her personal protector, after delivering her to the island of Crete. Talos was given the task of patrolling the island, circling it three times in a day, and driving pirates from the shore with volleys of rocks or a fiery death-embrace. He was eventually destroyed by the Dioskouroi with the aid of the magic of the witch Medea, when he tried to prevent the Argonauts from the landing on the island. Indian mythology also refers to robots, as do other cultures around the world.

We already have robots that we use in our factories and the toy stores offer our children very sophisticated little machines that seem almost sentient. In the next ten years robotic technology will become so advanced and humanoid that we shall soon have them walking amongst us, looking so very life-life that we may have difficulty in distinguishing them from biological organisms. Cyborgs or electronically and mechanically enhanced humans may also be within the realm of the rapidly achievable.

While we may think that this technology will liberate humans and make our lives easier, it may also create a host of other issues. We may be grateful for an uncomplaining robot at our beck and call doing those all those tiresome, boring chores and coping with the endless drudgery without complaint. We may become dependent on the robot who looks after an elderly or sick relative with the knowledge and care of an accomplished doctor. We may even see robots that are manufactured to specification so that we find in them the ideal sexual partner who will satisfy our every desire and whim. An army of robots slaves to serve humanity…

However, as robots become more sophisticated and the circuitry that controls their actions and behaviour becomes increasingly complex through the use of neural networks and “learning” self-correcting circuits, we may see the development of robots that can “think” and “feel”. The concept of a robot that is indistinguishable from humans, then begs the question, does this robot have human rights? Especially so if the robot has developed consciousness and may be in a position to demand human rights!

Anna Russel at the University of San Diego has considered this topic and writes in an article titled “Blurring the love lines”: “While this humanoid is a giant leap forward technologically, if a self-aware, super-intelligent, thinking, feeling humanoid is developed, the legal system will be hard-pressed to distinguish this creature legally from human actors on grounds not stemming from a religious or moral prejudice.”

Once again, in the very near future we shall be faced with huge moral and ethical dilemma. We are still struggling to come to terms with unresolved issues surrounding IVF technology, the fate of human fertilised ova and embryos, human cloning, and we are still ambivalent over issues such as abortion, many human rights questions and unresolved issues over race, religion and sexuality. We are now poised to add to this burden another potential mine-field, about to open another ethical, moral and legal can of worms…

You’d better watch out, your sex robot could sue you for rape, represent themselves faultlessly in court and win the case, throwing you in gaol and taking all your property in damages!

robot |ˈrōˌbät; ˈrōbət| noun
A machine capable of carrying out a complex series of actions automatically, especially one programmable by a computer.
• (Especially in science fiction) a machine resembling a human being and able to replicate certain human movements and functions automatically.
• Used to refer to a person who behaves in a mechanical or unemotional manner: Terminally bored tour guides chattering like robots.
ORIGIN from Czech, from robota ‘forced labor.’ The term was coined in K. Čapek's play R.U.R. ‘Rossum's Universal Robots’ (1920).
Posted by Intelliblog at 21:56