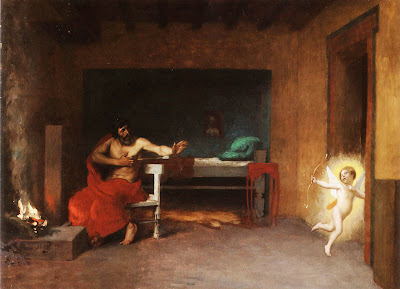 When Love beholds my beard that flows
White as the ocean's snowy spray,
He flies me swift as the eagle's flight
On rustling wings of golden light,
And seems to murmur as he goes,
" Old fellow, you have had your day."
Anacreon

For Art Sunday today, a painting by Frenchman Jean-Léon Gérôme (May 11, 1824 – January 10, 1904).  He painted and sculpted in the style now known as Academicism. The range of themes in his art included historical painting, Greek mythology, oriental subjects, portraits and various others. Gérôme was very influential in his heyday and brought Academicism to an artistic climax. Here is his painting Anacreon (one of three he painted of the famous ancient Greek poet). The theme here is “Eros takes flight”.

Anacreon lived in the sixth century B.C. His poems are about wine, love and getting old. They are easy to read thanks to his humour, vivid expressions and originality. For hundreds of years after the death of Anacreon there were many anonymous imitators who wrote poems called the “Anacreontea”. They also had a lot of success in their time, which was about 400 years after Anacreon lived.

One of the best poems from the Anacreontea tells how one night, when a storm raged outside, Eros knocks at the door of Anacreon, saying he's only a poor child lost in the tempest. Anacreon who feels pity for Eros, lets him in. They sit down at the fireplace. After a while Eros feels better again, takes his bow, saying he wants to check it, and shoots an arrow in the heart of Anacreon. Eros laughs and says: “Have courage! My bow is fine but I fear you will be in love again soon!”

Here is the poem in its entirety:

'Twas on the midnight dreary,
When north stars faintly peep,
And man with toil grown weary
Seeks the soft breast of sleep—
The god of love surprising
Me, knocked at my barred door.

" Who is it ?" said I, rising,
" That lets me dream no more ?"
But Eros says, "I only
Am a belated child,
I have wandered cold and lonely
In moonless night and wild."

Hearing these words, with pity
My heart beat for his woes;
I ope the door—a pretty
Winged boy my lamplight shows.
Cold shiver after shiver
Ran through his body fair;

A tiny bow and quiver
The little fellow bare.
I soothed him with caresses,
Him by the fire I placed;
The water from his tresses
I wrung; his hands embraced.

But when he had grown warm, he
Says, "I will try my bow;
I fear by weather stormy
The string is injured now."
He bends it then and through my
Liver a shaft he wings,
He little cares although my
Wound like a gadfly stings.

Up leaps he laughing loudly,
A mocking laugh laughs he,
And flushed with triumph proudly
Says, "Host, wish joy to me !
My bow indeed intact is:
Good-by, for we must part;
But as for you the fact is
You'll feel pain in your heart."
Posted by Intelliblog at 01:16