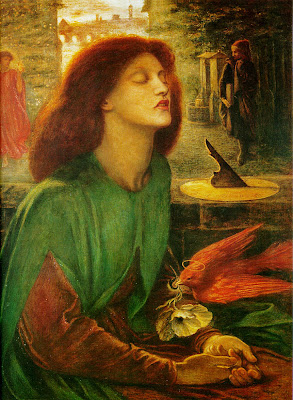 “Man is fond of counting his troubles, but he does not count his joys. If he counted them up as he ought to, he would see that every lot has enough happiness provided for it.” - Fyodor Dostoevsky

A serene Saturday, starting with breakfast in the garden where the temperature was just right as the sun was rising. A crisp, clear morning promising a warm day ahead. We went out for some shopping in Camberwell and then back home before the heat of the afternoon. The house remained cool and we sat down and watched a movie, nibbling on home-made popcorn. I then cleaned up my study a little as it was as though a bomb had hit it. These last few weeks with the proof-reading for the book, my study was very much a working room and the accumulated debris of several months had to be cleared.

This evening a special dinner and an even more special dessert. The night should finish with some perfect sounds. This is Patrick Cassidy’s “Vide Cor Tuum”, which is based on Dante's "La Vita Nuova", specifically on the sonnet "A ciascun'alma presa", in chapter 3 of the Vita Nuova. The song was produced by Patrick Cassidy and Hans Zimmer and was performed by Libera/Lyndhurst Orchestra, conducted by Gavin Greenaway. Artists are Danielle de Niese and Bruno Lazzaretti, who sing Beatrice and Dante, respectively.

The song first appeared in the movie “Hannibal”, while Dr. Hannibal Lecter and Inspector Pazzi see an outdoor opera in Florence, and was especially composed for the movie. This aria was chosen to be performed at the Oscars in 2002 during the presentation of a lifetime achievement award to producer Dino De Laurentiis and at the 53rd Annual Emmy awards. It was used later in Ridley Scott's Kingdom of Heaven, during King Baldwin IV's funeral.

Chorus: And thinking of her
Sweet sleep overcame me

I am your master
See your heart
And of this burning heart
Your heart
(Chorus: She trembling)
Obediently eats
Weeping, I saw him then depart from me

Joy is converted
To bitterest tears