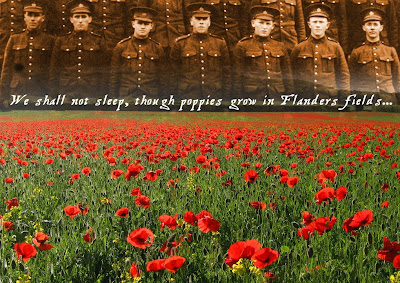 “What a cruel thing is war: To separate and destroy families and friends, and mar the purest joys and happiness God has granted us in this world; to fill our hearts with hatred instead of love for our neighbors, and to devastate the fair face of this beautiful world.” - Robert E. Lee

At 11 am on 11 November in 1918 the guns of the Western Front fell silent. This was a momentous occasion after more than four years of continuous warfare and many million deaths. The allied armies had driven the German invaders back, having inflicted heavy defeats upon them over the preceding four months. In November the Germans called for an armistice in order to secure a peace settlement. The Germans accepted the terms of the allies with an unconditional surrender. This was the end of World War I, the “Great War”, one whose viciousness and brutality astounded even hardened soldiers. Remembrance Day is an anniversary that is observed in most Commonwealth countries around the world and The eleventh hour of the eleventh day of the eleventh month has attained a special significance. The moment when hostilities ceased on the Western Front became universally associated with the remembrance of those who had died in the war, but as the years have passed the remembrance of the fallen in all wars of the past is a solemn occasion to observe this day.

The bright red Flanders poppy has long been a part of Remembrance Day. After the First World War, red poppies were among the first plants to spring up in the devastated battlefields of northern France and Belgium. In soldiers’ folklore, the vivid red of the poppy was thought to come from the shed blood of their fallen comrades that had soaked the ground. The sight of poppies on the battlefield at Ypres in 1915 moved Lieutenant Colonel John McCrae to write the poem “In Flanders Fields”. In English literature of the nineteenth century, poppies had symbolised sleep or a state of oblivion; in the literature of the First World War a new, more powerful symbolism was attached to the poppy – the sacrifice of the shed blood of fallen soldiers.

In Flanders fields the poppies blow
Between the crosses, row on row,
That mark our place; and in the sky
The larks, still bravely singing, fly
Scarce heard amid the guns below.

We are the dead. Short days ago
We lived, felt dawn, saw sunset glow,
Loved, and were loved, and now we lie
In Flanders fields.

Take up our quarrel with the foe:
To you from failing hands we throw
The torch; be yours to hold it high.
If ye break faith with us who die
We shall not sleep, though poppies grow
In Flanders fields.