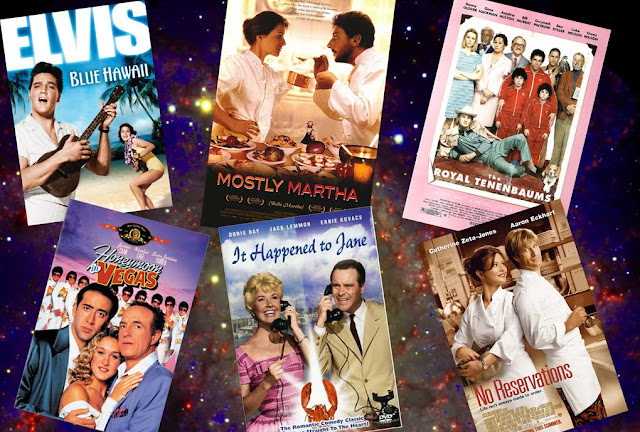 We have watched a few comedies over the last couple of weeks, which goes to show that we have had need for some serious escapism. When it came to select a film to watch, the deep serious stuff got the flick and we chose instead the light and frothy, humorous, funny or downright silly. I’ll present a few of these comedies we saw lately with a brief review and a recommendation (or not).

The first was a very formulaic vehicle for Doris Day, from those innocent days of the 1950s, which even as this film was being made were passing by so rapidly. It is the 1959 Richard Quine film “It Happened to Jane”. Doris Day plays Jane, a widow who is trying to earn a living by farming and selling lobsters. Jack Lemmon plays George, her lawyer friend (long-suffering and virtuous) who looks after Jane and her children (but no hanky-panky – it is a 1959 film and Jane is a widow and George is even a scout leader!). When one of Jane’s shipments of lobsters is ruined because of railway inefficiency, Jane decides to sue the railroad magnate who is the “meanest man in the world” (played by Ernie Kovacs). The usual trials and tribulations follow with love, justice and the American Way triumphing in the end. This was a predictable and fairly tedious movie, interesting only as a historical document. Mildly amusing in parts, irritating in others.
Our rating 5/10 (IMDB rating 6.6/10).

The 2007 Scott Hicks film “No Reservations” is a remake of the 2001 German film “Mostly Martha” written and directed by Sandra Nettelbeck. We have seen both films and we still prefer the original German one, although the US version is quite good too. Catherine Zeta-Jones and Aaron Eckhart are much better looking and sexier than the more average-looking Martina Gedeck and Sergio Castellito. The production is slicker and the little niece in the US version is the cuter Abigail Breslin, rather than the more taciturn Maxime Foerste. The remake didn’t disappoint, but it was a little more shallow than the original. All actors played well and Catherine Zeta-Jones looked most demure in her chef’s outfit. Definitely worth seeing either or both of these films.
“No Reservations” - Our rating 6.5/10 (IMDB rating 6.3)
“Mostly Martha” – Our rating 7.5/10 (IMDB rating 7.3).

Elvis Presley was guilty of making many movies in his career, when perhaps he should have just sung more. Most of the Presley movies were predictable, mind-rotting mash, a loose scaffold to support his singing character who was ever ready to belt out another song. We really like his songs, but his movies are really trashy. We watched the Normal Taurog 1961 “Blue Hawaii” knowing what we were in for, but the DVD was a gift and we did not look at the horse’s mouth… Elvis starred as young man back in Hawaii after being a soldier in Europe. He has to find his own way rather than be part of his father’s business. Joan Blackman plays his Hawaiian/French girlfriend while Angela Lansbury plays his scatty, socialite mother. Lots of songs are sung, of course and the scenery is quite delightful. Only for Elvis fans…
Our rating 5/10 (IMDB rating 5.7).

Speaking of Elvis, how about a movie with hundreds of Elvises, 34 of them flying? The 1992 Andrew Bergman film “Honeymoon in Vegas” is a stilted comedy starring a very uncomfortable looking Nicholas Cage and an ageing James Caan, vying for the love of Sarah Jessica Parker, all in Vegas during an Elvis impersonator convention. It’s kitch and predictable and didactic and very Hollywood.
Our rating 5.5/10 (IMDB rating 5.8).

And what was our favourite, Wes Anderson’s 2001 movie “The Royal Tenenbaums”. This was a comedy drama about the vicissitudes of a very strange family, the Tenenbaums. Three grown prodigies, all with a unique gift of some kind, and their mother are staying at the family household. Their father, Royal, who had left them long ago, and comes back to make things right with his family. The stellar cast includes Gene Hackman, Anjelica Huston, Ben Stiller, Bill Murray, Gwynneth Paltrow and Luke Wilson. This is quite an engaging, though odd film, where drama mixes with black humour.
Our rating 7.5/10 (IMDB rating 7.6).

Enjoy your week!
Posted by Intelliblog at 02:11