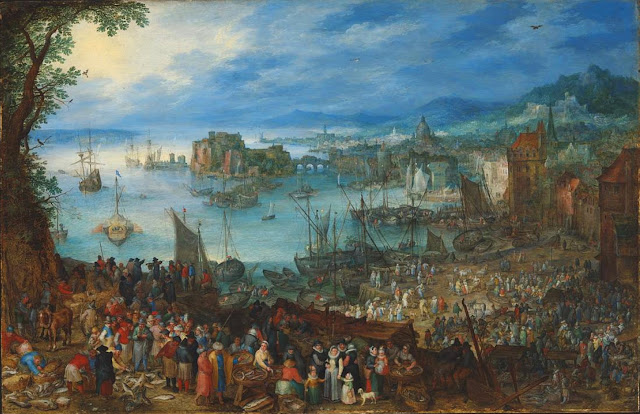 “One of the best things about paintings is their silence - which prompts reflection and random reverie.” - Mark Stevens

For Art Sunday today a painting I love not for its foreground, but for its background. It is Jan Brueghel the Elder’s (1568-1625) “Large Fish Market” of 1603 presently in the Alte Pinakothek in Munich. Jan Brueghel was the youngest son of the brilliant and idiosyncratic Pieter Brueghel. His older brother, Pieter II, is mainly known as a copyist of his father's works, but perhaps because his father died when he was an infant, Jan developed a very different style. He was a skilled landscapist and still-life painter, often collaborating with other artists when there was a need to put figures into the foreground of a scene.

This particular painting is extremely busy and contains an inordinate amount of detail. The foreground is awash with people and fish, animals, bits and pieces. One is at a loss to try and determine where to look first. Many small details are picaresque or humorous, some poignant others amusing. The pullulating mass of humanity at the market attracts the eye and then repels. The glory of the picture is in the middle and background where a seascape to the left and a cityscape to the right attract the eye with their mystery.

The glorious ultramarine tones of the distant mountains and sky contrast with the warm yellow of the sunlight to the left and once again one immersed in the details of ships, buildings, distant figures. There is an invitation to escape into this window into the past and discover the hidden mysteries of the alleys and laneways, climb the steps of the fortress, seek out some distant rooftop and gaze out into the sea and the ships of the harbour.

Because of his fondness of certain subjects and glowing enamel paint, Jan Brueghel was given the nickname “Velvet” or “Flower” Brueghel. Besides historical scenes, paradisiacal images of animals, and genre scenes, he was above all a painter of landscape and of flower pieces. Brueghel was well-to-do and respected, owning several houses in Antwerp as well as a considerable art collection. His sons and grandsons continued the family artistic tradition.
Posted by Intelliblog at 01:59