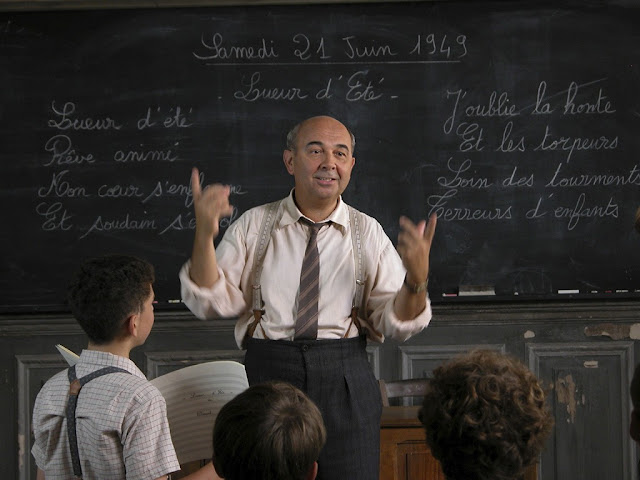 We saw a wonderful French film at the weekend, Christophe Barratier’s 2004 film “The Choristers”. It was a very understated, simple film,  told quietly and with restraint, yet it dealt with some potent issues and packed quite a punch in the end. The film was nominated for the Oscars as “Best Foreign Language Film” for 2005, but lost to “Tsotsi”.

The story is set in 1949 France, in a small provincial town where in the outskirts there is a boarding school for “problem children”. The principal Monsieur Rachin, is an strict disciplinarian whose policy for the school is “action – reaction”. Any misdemeanour is quickly followed by harsh punishment. His approach antagonises the young inmates even more and this causes ever more new problems.

On January 15, 1949 M. Clément Mathieu arrives at the school, to assume duties as a supervisor. He is a middle-aged man who is struggling to find his place in the sun after a series of failures. Although he finds the boys an unruly bunch, Mathieu sees the adverse effects of the “action – reaction” policy, and clashes with Rachin, while undermining the policy.

Slowly, Mathieu's fairness and his love for the students does have a positive effect on a group of them. Mathieu approaches the headmaster to obtain permission to start a choir in the school. His move is a courageous one for him as a failed musician, as well as for the initially reluctant and “tough” students. During his efforts, Mathieu comes close to two different students for two different reasons. Pépinot, a sad little boy, who is withdrawn and is constantly awaiting for his father to visit, and Pierre Morhange, an older student, who is introverted, but likely to burst out periodically in episodes of subversiveness (“the devil with the face of an angel” as the other teachers describe him). However, Morhange also has a love of music and is truly talented as well.

The film is very engaging and enjoyable, with many poignant and memorable scenes. The acting is excellent, especially the children who give magnificent performance. An integral part of the film is the beautiful music, which won several awards for Bruno Coulais, the composer. I highly recommend this movie which is an absolute delight.
Posted by Intelliblog at 01:59