A DAY AT HEIDE ART MUSEUM 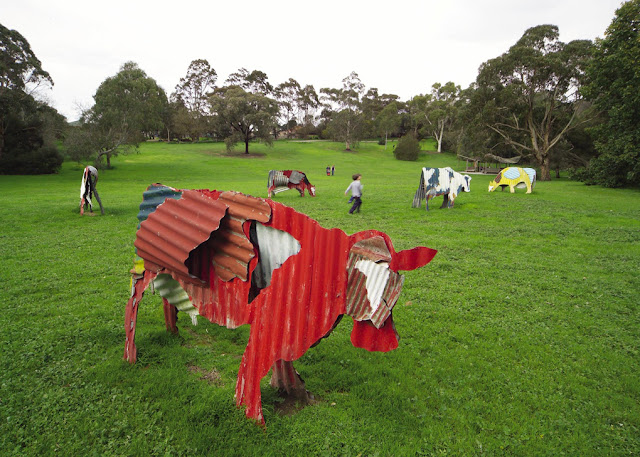 “What garlic is to salad, insanity is to art.” Augustus Saint-Gaudens

We visited the Heide Museum of Modern Art recently (most often simply referred to as “Heide”). This is only one of Melbourne’s public contemporary art museums and is located in Bulleen, east of Melbourne, only a few minutes drive from our house. It was established as a museum in 1981, and is made up of a number of detached buildings, with surrounding gardens and parklands, which go right up to the Yarra River flats. As well as being a wonderful museum, the site is of historical importance and the whole complex is used as gallery space to exhibit works in various media by contemporary Australian artists.

Heide occupies the site of a former dairy farm that was purchased by the prominent Melbourne art collectors John and Sunday Reed in 1934 and became home to a collective known as the Heide Circle, which included many of Australia’s best-known modernist painters, such as: Albert Tucker, Sidney Nolan, Laurence Hope Joy Hester and others, who lived and worked in the former farm house (Heide I).

Between 1964 and 1967, a new house was built (Heide II), and this is considered to be one of the finest examples of modernist architecture in Victoria, and was designed by acclaimed architects McGlashan and Everist. In 1981, the museum was established on the site, incorporating the existing buildings and surrounding gardens & parklands as exhibition and gallery spaces. The main gallery building (Heide III) was constructed in 1993 and the museum continued to broaden its collection of works to include all forms of contemporary Australian art, including some by contemporary indigenous artists.

The museum underwent major refurbishment in 2005-2006. Part of this renewal was the establishment of several sculptural and installation art pieces, landscaping and redesign of the gardens, construction of a new education centre and gallery space, extension of the Heide III building and various other works.   In 2009 after 19 months of redevelopment, the cafe reopened in November as Café Vue at Heide.

The picture shows the installation piece on the lawns to the north of the museum, entitled “Cows”, by Jeff Thomson, 1987 (photographed by J.Gollings, 2004). The cows are made of corrugated iron, which is integral part of outback Australia (and not only!), being used as a construction material, particularly of house and shed roofs. The rural connections of the material are extended by the subject matter, giving a particularly Australian flavor to the bucolic landscape installation. The piece is quite striking, especially when first seen. There are now many imitations of this piece, with all sorts of animals being up for sale in many a local garden centre so everyone can have a corrugated iron pet in their back yard!

As well as visiting the museum we always visit the wonderful kitchen garden, which was originally a ‘working garden’ supplying vegetables, herbs and fruit for meals prepared by Sunday Reed, an innovative cook.   The garden is fully enclosed to protect it from rambling animals as well as the effects of extreme weather. Ravaged by floods, even during recent years, Heide’s gardeners have maintained the historical plantings in the garden as well as returning the lower section to rotating crops of vegetables, which are used to prepare meals in the Café Vue at Heide.
Posted by Intelliblog at 09:54