ONE WEDDING INVITATION NOT TO ACCEPT... 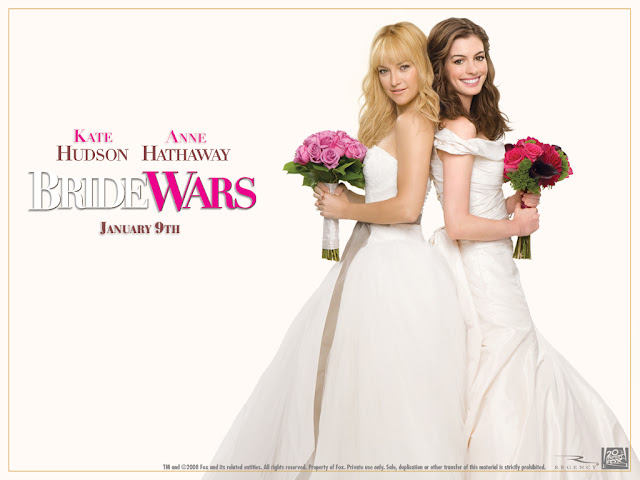 “The Wedding March always reminds me of the music played when soldiers go into battle.” - Heinrich Heine

Under sufferance, at the weekend, I sat through one of the worst movies I have seen recently. It was Gary Winick’s 2009 “Bride Wars”. This very definitely falls into the “chick flick” genre, and more specifically (I guess) the teenager market. I took one look at the synopsis on the back of the DVD and was certain I would not go for this film. However, one has to make concessions and I braced myself and watched it. In the end although none of the four of us watching it liked it particularly, the other man and I really disliked it, while our women companions were the ones giggling now and then (while we were rolling our eyes up at the ceiling!)…

The plot is formulaic and pulls every cliché out of the tattered bag of tricks in order to concoct the unlikely and ostensibly funny story. In New York’s Manhattan there are two childhood friends who have grown up to be a successful lawyer, Liv (Kate Hudson), and the underachieving schoolteacher, Emma (Anne Hathaway). They both have boyfriends and both are obsessed with marriage, having planned lavish weddings at the Plaza Hotel from their childhood when they were playing at being bride and groom in their attic. They are proposed to by their boyfriends on the same day, and as they always dreamed, they plan their wedding parties at the Plaza Hotel. They use the services of the most famous wedding planner, Marion St. Claire (Candice Bergen); who else would plan the perfect wedding? However, due to a mistake made by Marion’s secretary, their weddings are scheduled for the same day, at the same place at the same time. Neither of them wishes to negotiate and neither agrees to change the date of her wedding. From friends they become mortal enemies and for most of the film they keep trying to sabotage each other’s wedding preparations and the ceremony itself.

Unfortunately, the film is too contrived, the characters two-dimensional, the acting average and the jokes too sparse and too predictable. If you see the trailer, you’ve seen all the jokes, I think.  As is usual in these films there is a transformation and a happy end (of course), but it is all just so tedious! The production may be slick and the sets (especially the Plaza) lavish, however, at the end of it all I could think was “what a waste…” Waste of money, waste of actors, waste of production staff, waste of resources, but most of all waste of my time.

I was so intrigued by the film’s under-average performance that I googled it to see what the critics had to say. I was not surprised to find out that Mark Kermode (BBC’s film critic) found the film execrable. He nominated it as one of the worse films of 2009 and in fact, threatened that if this film was not one of the 10 worst films of 2009 he would quit film criticism! Fortunately, he was not wrong.

This film is not particularly challenging in terms of your attention span, not really funny, nor original. It is not a romantic comedy, not particularly successful as a film about friendship, nor is it a film that is memorable or one that I would recommend to someone to watch. It’s enough admitting here that I watched it. Maybe I should now consider joining “Terrible Film Watchers Anonymous”…
Posted by Intelliblog at 09:11