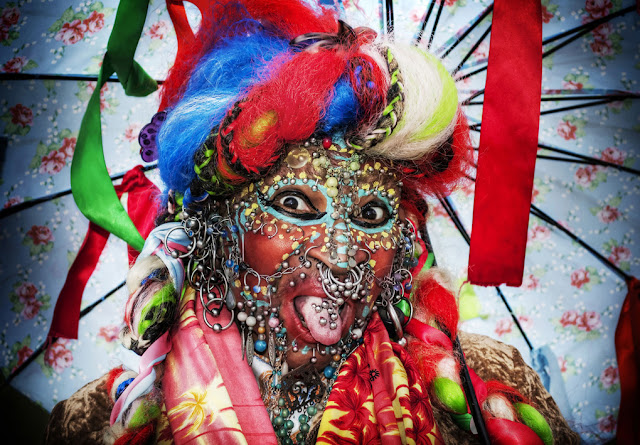 “Know, first, who you are; and then adorn yourself accordingly.” – Epictetus

The desire to adorn ourselves is something that has its origins deep in our dim and distant past. Something that is ingrained within our genetic make-up, reflecting our animal origins where ostentatious display signifies readiness for mating and where the brightness and splendour of the display could prove to make a big difference between reproducing many times or not reproducing at all. The feathers of a peacock, the mane of a lion, the plumage of a bird of paradise are all cases in point.

The sporting of bright clothing, enormous hats, outrageous hairdos, extensive tattoos, exaggerated make-up and shiny jewellery by humans certainly developed from this type of animal display and its purpose of course is to attract potential mates. The way that we adorn ourselves can prove to be a powerful attractant and the character of the adornment will send out signals as to who we are and whom we wish to draw to us. The display of a rooster will leave a peahen quite unmoved, while the bristling, spotted fur of a hyena will fail to attract a lion. The beautifully made-up face of an attractive woman who wears earrings, has carefully coiffed hair and is dressed appropriately will attract many a blue-blooded male who will gravitate towards her. A similar style of adornment on a male (à la Boy George) will turn most males right off, but then again may attract some other people who are so inclined to admire such adornment.

Adornments can also be worn to embellish, enhance, or distinguish the wearer. They can define cultural, social, or religious status within a specific community. When items of adornment display economic status, they are often rare or prohibitively expensive to most others. Adornments include cosmetics, jewellery, clothing accessories, medals, ceremonial additions to clothing or hair, facial hair, fingernail modification, piercing, lip plates, tattooing, braiding, and head gear.

Personally, I will tolerate no jewellery or other adornment on me, and it is even grudgingly that I wear a watch (which is functional and quite plain). My clothes could best be described as drab (dark shades of gray, blue, black and navy), while my hair is very short and cut in a very conservative style. Oh, I don’t wear any make-up either. I do tend to blend into a crowd. Perhaps that may explain that there are no potential mates beating a path to my door…

The picture above is of Elaine Davidson, a former nurse, born in Brazil but now residing in Edinburgh, Scotland. According to the Guinness Book of Records, Elaine Davidson is the “Most Pierced Woman in the World”. In May 2000, Davidson had 462 piercings, with 192 in her face alone. By August 9, 2001 when she was re-examined she was found to have 720 piercings. Performing at the Edinburgh Festival in 2005, the Guardian reported that she now had 3,950 body piercings. She has more piercings in her genitalia than in any other part of the body - 500 in all, externally and internally. The total weight of her jewellery is estimated to be about 3 kilograms. As of May 2008, Davidson’s piercings totalled 5,920. In February 2009 her piercings totalled 6,005, while in March 2010, Elaine reported a total of 6,725 piercings.

Elaine appeared at the Edinburgh registry office having added another ring to her collection of jewellery, this time a wedding ring. She was married to an unnamed man today. Which proves the point that her jewellery display was a strong attractant to a mate…