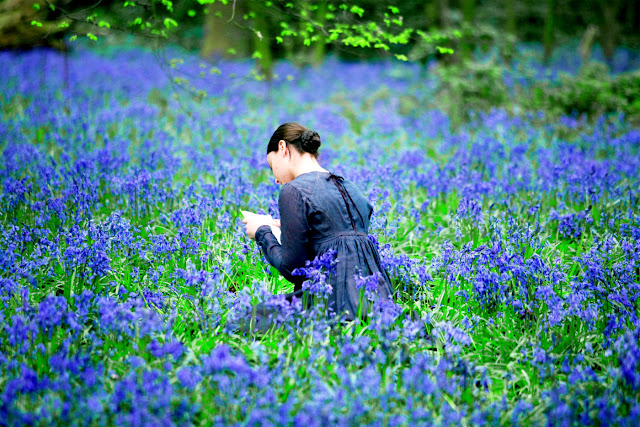 “Poetry is the journal of the sea animal living on land, wanting to fly in the air. Poetry is a search for syllables to shoot at the barriers of the unknown and the unknowable. Poetry is a phantom script telling how rainbows are made and why they go away.” - Carl Sandburg

Bright star, would I were stedfast as thou art –
Not in lone splendour hung aloft the night
And watching, with eternal lids apart,
Like nature's patient, sleepless Eremite,
The moving waters at their priestlike task
Of pure ablution round earth’s human shores,
Or gazing on the new soft-fallen mask
Of snow upon the mountains and the moors –
No – yet still stedfast, still unchangeable,
Pillow’d upon my fair love’s ripening breast,
To feel for ever its soft fall and swell,
Awake for ever in a sweet unrest,
Still, still to hear her tender-taken breath,
And so live ever – or else swoon to death.

John Keats (1795-1821)
We watched the Jane Campion 2009 film “Bright Star” at the weekend. Its title is taken from the sonnet by John Keats reproduced in its entirety above. The poem was used by Keats as a declaration of love for his muse Fanny Brawne, a young woman who seemingly had nothing in common with the poet. However, she inspired in him a great love and in turn loved him earnestly and steadfastly. Their love was never consummated, a love cut short by Keats’ untimely early death.

The film concentrates on the short period of time when John Keats and Fanny Brawne meet and interact, eventually falling in love. The movie starts in 1818 in Hampstead Village on the outskirts of London. Poet Charles Brown lives in one half of a large house, while the Dilkes family live in the other half. Through their association with the Dilkes, the fatherless Brawne family get to know Mr Brown. The Brawne’s eldest daughter, Fanny Brawne dislikes Mr Brown a feeling he reciprocates. She thinks him arrogant and rude, while he thinks that she is pretentious and uneducated. He dismisses her as a “seamstress”, knowing only how to sew (although well, as she makes all her own fashionable clothes). He criticises her for being a shallow flirt and accuses her of giving opinions on subjects she knows nothing about. The struggling impoverished poet John Keats comes to live with his friend, Mr Brown. Miss Brawne and Mr Keats have a mutual attraction to each other, a relationship which, however, is slow to develop in part since Mr Brown does his utmost to keep the two apart. When they do eventually manage to get together, other obstacles face the couple.

The film is slow and contemplative. Anyone who comes to watch it expecting a rich plot, endless scintillating repartee, twists and turns of narrative, and adventurous action will be sorely disappointed. This is a film highlighting the romance of two young and immature, romantically inclined and sensitive people, one of whom happens to be a brilliant poet. The plot plods along and follows their insecurities, self-doubts, misapprehensions and weaknesses. Their romance follows a rocky path, which is not helped by their inexperience and their overwhelmingly doubtful and tentative attempts at initiating their love affair. Fanny’s verbal exchanges with Mr Brown are the only amusing thing in the film and there are some witty one-liners there.

Jane Campion is well known to cinemagoers from her previous successful work and her 1993 film “The Piano” is one which remains memorable for a long time after one sees it. I was half expecting something similar with this film and there are touches reminiscent of “The Piano” here and there. For example, Toots, Fanny’s young sister is very much like Flora (Anna Paquin) in the older film. There are some stunningly beautiful images that resemble a moving painting in both films and the acting is overall very good. Music is apt and well-selected for “Bright Star” also, although lacking the passion and tempestuousness of “The Piano”.

We so wanted to like this film immensely, but unfortunately it left us strangely unsatisfied. It was well acted, well photographed, conveyed the atmosphere of the time well and was overall well-crafted. It contained some beautiful moments and the photography was beautiful, with some stunning images at times. Nevertheless, the plot was weak and the subplot insubstantial and more of a distraction than anything else. As a movie it was forgettable, although some of the images were quite memorable including the one illustrated above where Fanny is reading one of Keats’ letters in a field of bluebells.

Watch the movie if you would like something to distract you and would like some beautiful images to admire. However, there was no bite or deep emotion in the film and even some very sad moments failed to move us. No poignancy and no climax, rather, a very pedestrian, ambling type of film where the characters walk on and off their scenes acting well, but somehow not managing to be truly passionate about what they were feeling. Perhaps it is a true reflection of the times and of the people involved. Deep romantic love but no spark of passion to ignite their deepest feelings and needs.
Posted by Intelliblog at 10:39