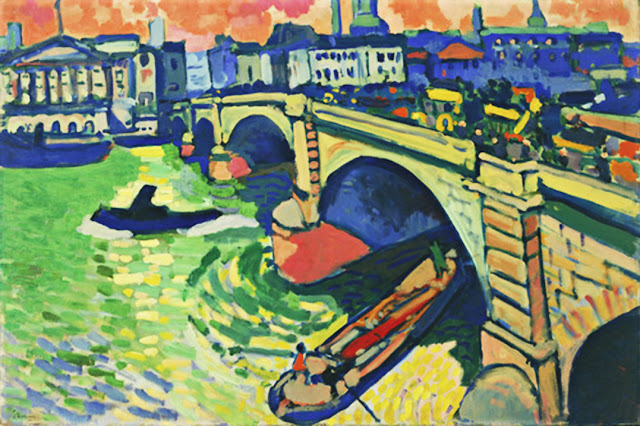 “Every painter has been guilty of wanting to portray a moment in nature instead of realising that a simple luminous arrangement would put the mind into the same state as a landscape.” - André Derain

For Art Sunday today, André Derain (10th June 1880, Chatou, France to 8th September 1954, Garches, France). He is one of the important French post-impressionists and major exponent of fauvism. Derain received a good education at the College Chaptal as his father wanted to make him an engineer. Derain, however, was drawn to painting and became Carriere’s pupil and a friend of Matisse. In 1889 he met Vlaminck and together they formed the Chatou school.

Derain shared with Vlaminck the choice of subjects for their paintings (they both had the same passion for Van Gogh), notably landscapes and suburban scenes, but they also had much in common in technique: They both used brushwork, applied in squares, dots and short strokes, and while Derain’s use of colour is bold and contrasted as Vlaminck’s it is less frivolous and dominated by tones of green and violet. Both artists had a predilection for curves in their composition. But it was Matisse who was the catalyst for the outpouring of Derain’s talent. On one occasion, when staying at Collioure with Matisse, Derain said: “I knew moments of great doubt and it was Matisse who reassured me”.

Contact with Matisse gave Derain’s painting a delicate quality with a more relaxed technique and economy of pictorial elements. His mastery fully showed itself in the series of pictures he painted in London between 1906 and 1907, which are considered his Fauvist masterpieces. It is in these paintings that the last traces of Impressionism and Divisionism vanish, and the colouring (pink, green, yellow, blue), although in a lower key than Vlaminck’s, is more animated and adhering to the fauvist palette, applied in vibrant daubs. His composition is skilful following the shape of surrounding objects, giving an appearance of solidity, which is emphasised by the use of outline.

From 1912 to 1914 Sienese art influenced Derain and his “Gothic” period ensued but terminated during the war. After 1920 the south of France and Italy inspired in him a Classical period. “The Hunt” earned him the 1928 Carnegie Prize. He was immensely active during 1930 and 1931, with several exhibitions at Paul Guillaume, commissions for stage design for the theatre and for the Diaghilev Ballet, costume design, illustrations for “Pantagruel” and La Fontaine’s “Contes”, sculpture and masks. In 1935 he left Paris and retired to Saint-Germain-en-Laye. He died in a clinic at Garches after a road accident. In 1931, after ten years of grudging criticism, his qualities as a landscape painter began to be recognised.

His “London Bridge” above was painted in London, in the Winter of 1906. It is an oil on canvas (66 x 99.1 cm) work that best exemplifies Derain’s fauve style. The brilliant colour, the distillation of the scene into its simplest structural components the strong curvilinear composition and the strong brushwork are all elements that make this painting characteristic of fauvism and Derain. That wintry London could inspire such a bright joyous work is quite astounding!
Posted by Intelliblog at 12:01