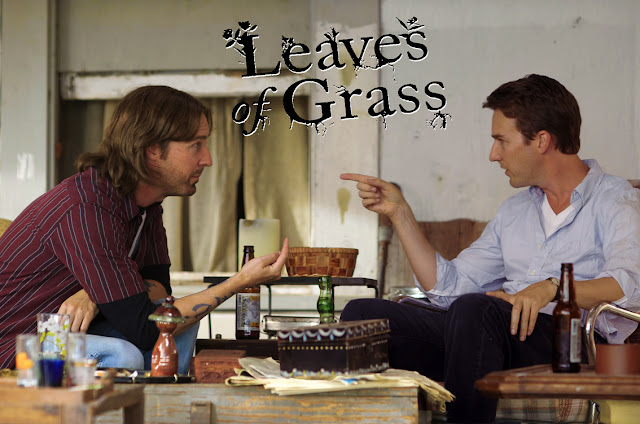 “Drugs are a waste of time. They destroy your memory and your self-respect and everything that goes along with your self esteem.” - Kurt Cobain

For Movie Monday today, Tim Blake Nelson’s 2009 film “Leaves of Grass”, starring Edward Norton, Keri Russell, Henry Max Nelson and Susan Sarandon. The script was also written by Tim Blake Nelson, who also acted in the movie, and it was quite an interesting mix of the familiar with the original. Although one could view this film as a black comedy, there were scenes of high drama and the theme of family reconciliations was well-served in the end.

Edward Norton plays identical twin brothers, Billy, a talented and famous university professor of philosophy and Brady a big time marijuana grower and dealer in Tulsa. The film builds up to the first encounter of the two brothers after many years of being estranged, bringing with it much comedic incident. The strained relationship between the twin brothers is not helped by Brady tricking Bill into revisiting the family, however, smoking of the choice marijuana that Brady cultivates soon has Bill collaborating with him to negotiate a loan extension with the state’s drug kingpin from Tulsa, the otherwise respectable oilfield equipment purveyor and Jewish philanthropist, Pug (well-played by Richard Dreyfuss).

Bill mends bridges with his mother who has secluded herself in a nursing home, although she does not need to and is charmed by local teacher and poet, Janet (Kerri Russell). Bill learns of the different kinds of love and although the ending is quite unexpected, one can see that it is all predicted earlier and one understands thoroughly both Bill’s predicament and his final lesson learnt.

The acting was superb with Norton portraying competently and believably the two twins of quite different personalities. The other actors also played with gusto and gave excellent performances, without once lapsing into farce, which would have been very easy to do in some parts of the movie.

The movie is quite violent and there are scenes that would offend the squeamish, however, they were warranted, given the subject matter. Overall, quite an enjoyable movie, which superficially could be seen as a comedy, but which is better described as a tragicomedy, with some very deep messages that are not foisted on the viewer with a steel glove. We would recommend it quite highly.
Posted by Intelliblog at 18:16