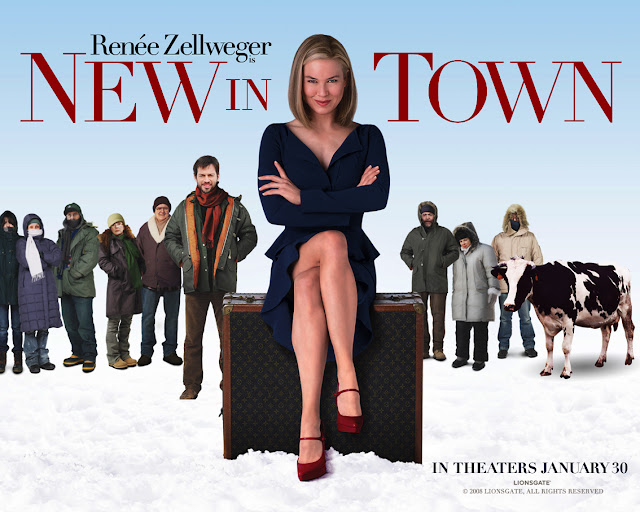 “Comedy just pokes at problems, rarely confronts them squarely. Drama is like a plate of meat and potatoes, comedy is rather the dessert, a bit like meringue.” - Woody Allen
We watched a very lightweight romantic comedy at the weekend – not exceedingly objectionable, but at the same time not particularly memorable. It was the 2009 Jonas Elmer film “New in Town” starring Renée Zellweger, Harry Connick Jr. and Siobhan Fallon Hogan. The plot is predictable and lightweight, the humour mildly amusing and the viewpoint fairly innocent, although there is a plot concession to the economic downturn and acknowledgement that all is not right in the world. It is once again a typical “chick flick”, hardly original but nevertheless competently done.
Zellweger plays Lucy Hill, a high-profile businesswoman of a Miami-based conglomerate, who volunteers to head north to Minnesota to “clean-up” a tiny food plant, cut its workforce by half and retool for an automated new product launch. She’s the typical career woman dreaming this assignment will land her a vice-presidency. She is lacking in people-to-people skills and her empathy with those in adverse situations is about –10. She comes to freezing Minnesota, dressed inappropriately (high heels, mini skirt and thin coat) and manages to alienate every local in sight with her insensitivity. Siobhan Fallon Hogan plays Blanche, her local personal assistant, who is much better at making tapioca puddings or scrapbooking than being a high-powered secretary. The film gets lots of comedic mileage out of the clash of city smarts versus folksy wisdom. Harry Connick Jr. plays Ted, the area union chief, who is Lucy’s romantic interest, and there is also a strong supporting performance by J.K. Simmons as the plant foreman who runs afoul of Lucy’s plans.
“New in Town” is not like the similar old movies of Capra, for example, but is quite amusing and gives Zellweger to show off her comedic skills. Harry Connick Jr is adequate and his role is fairly traightforward, but the film belongs to the girls with the interactions between Lucy and Blanche providing the most amusement. Although the jokes are mild and some are old, they are delivered well and one can spend a fairly pleasant 97 minutes watching this film. Danish director Jonas Enders making his Hollywood debut plays it very safe and hence he comes up with a fairly “safe” pedestrian product and he struggles to make any scene memorable.
The rather sinister turn of the plot about lay-offs and disappearing companies that are becoming all too frequent in our daily life these days is not examined to any depth by the film. This could have been explored more and provided a greater opportunity for black humour. The “Deus ex machina” that will assure the film of a happy end is predictable, and unfortunately we have run out of both “dei” and “machinae” in real life. We would recommend this film as a lightweight romantic comedy that one can watch and smile or giggle at occasionally, an innocuous escapist soap bubble that will relieve some tension and stress of the viewers. An average, typical, Hollywood B-grade romantic comedy.
Do you have a blog entry that deals with movies, the cinema, actors, movie reviews? then use the link below to link to this post!