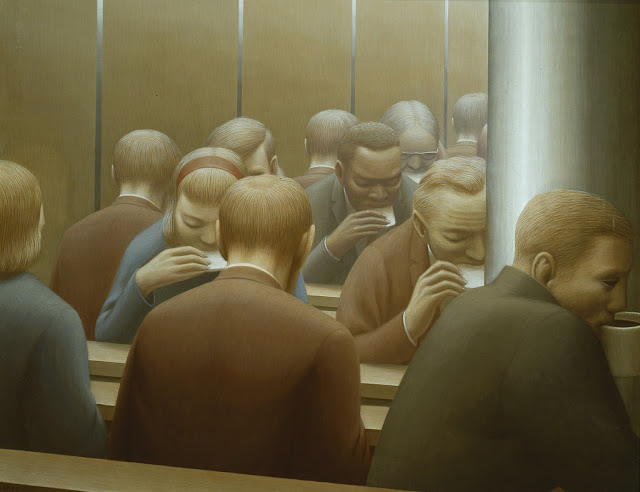 “One cannot walk through an assembly factory and not feel that one is in Hell.” - W. H. Auden
The image today that Magpie Tales has selected is “Lunch”, by George Tooker, painted in 1964, and exhibited in the Columbus Museum of Art. I was not aware of the work of this artist, so I googled…
George Clair Tooker, Jr. (August 5, 1920  – March 27, 2011) was a figurative painter whose works are associated with the Magic realism and Social Realism movements. Tooker was raised by his Anglo/French-American father George Clair Tooker and English/Spanish-Cuban mother Angela Montejo Roura in Brooklyn Heights and Bellport, New York, along with his sister, Mary Fancher Tooker. Tooker wanted to attend art school rather than college, but ultimately abided by his parents’ wishes and majored in English literature at Harvard University, while still devoting much of his time to painting. During 1942, he graduated from college and then entered the Marine Corps but was discharged due to ill-health.
In 1943 Tooker began attending at the Art Students League of New York, where he studied with Reginald Marsh and Kenneth Hayes Miller. Early in his career Tooker’s work was often compared with other painters such as Andrew Wyeth, Edward Hopper, and his close friends Jared French and Paul Cadmus. Working with the then-revitalised tradition of egg tempera, Tooker addressed issues of modern-day alienation with subtly eerie and often visually literal depictions of social withdrawal and isolation.
He had a long-time partner, William Christopher, who died in 1973. He was one of nine recipients of the National Medal of Arts in 2007. Tooker died on March 27, 2011, due to kidney failure.
The painting is gloomy and captures the urban reality of so many of the denizens of the industrial megalopoleis. The poem below was written quickly and spontaneously immediately I looked at the painting. the result is literal and (hopefully) magically realistic as is the painting.
Lunch Break
Some days I feel like that:
Work, eat, sleep,
Work, eat, sleep.
My mind grows numb
As those around me
Look right through me
As though I were a ghost.
Some days the gray skies
Permeate my soul
Deadening it imperceptibly.
And the rain seeps into
Every interstitial space
Of my cellular matrix,
Diluting my spirit.
Some days the gnawing
Of teeth on identical feed,
Reminds me of rats
With black beady eyes,
Deriving nourishment from
The suspicious overcrowding
Of the rat-race.
Some days in this dog-eat-dog world,
I close my eyes as I chomp
(Making papier maché
Out of my cardboard lunch)
And I think of green pastures,
Sunshine, fresh herbs
Fruits of the earth, just picked…
Posted by Intelliblog at 22:13