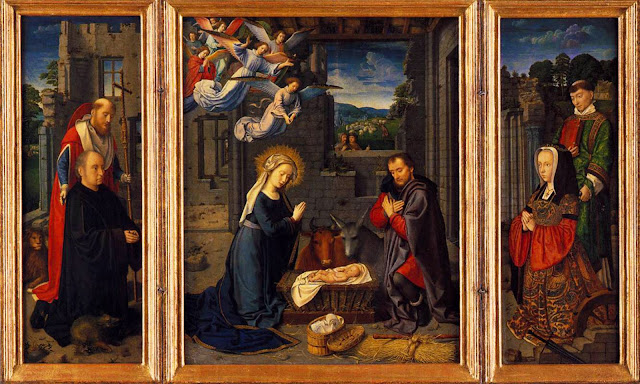 Gerard David, (born c. 1460, Oudewater, Netherlands – died August 13, 1523, Bruges, Belgium), was Flemish painter who was the last great master of the Bruges school.  Very little is known about David’s early life, during which time his work reflects the influence of Jacob Janszoon, Dieric Bouts, and Geertgen Tot Sint Jans. He went to Bruges, presumably from Haarlem, where it is believed he formed his early style under the instruction of A. van Ouwater. He joined the guild of St. Luke at Bruges in 1484 and became dean in 1501.

In his early work, such as “Christ Nailed to the Cross” (c. 1480) and the “Nativity” (early 1480s), he followed the Haarlem tradition as represented by Ouwater and Geertgen but already gave evidence of his superior power as a colourist. In Bruges he studied masterpieces by Hubert and Jan van Eyck, Rogier van der Weyden, and Hugo van der Goes, and he came under the influence of Hans Memling. To this period belong the “Madonna Triptych” (c. 1495–98) and the “Enthroned Madonna with Angels” (c. 1490–95). But the works on which David’s fame rests most securely are his great altarpieces – the “Judgment of Cambyses” (two panels, 1498) and the triptych of the “Baptism of Christ” (c. 1502–07) at Bruges; the “Virgin and Child with Saints and Donor” (c. 1505); the “Annunciation” (1506) on two panels; and, above all, the documented altarpiece of the “Madonna with Angels and Saints” (1509).

These are mature works – severe yet richly coloured, show a masterful handling of light, volume, and space. The “Judgment” panels are especially notable for being among the earliest Flemish paintings to employ such Italian Renaissance devices as putti and garlands. In Antwerp David became impressed by the life and movement in the work of Quentin Massys, who had introduced a more intimate and more human conception of sacred themes. David’s “Deposition” (c. 1515) and the “Crucifixion” (c. 1510–15) were painted under this influence and are remarkable for their dramatic movement.

Authorities disagree about the intent of David’s eclectic, deliberately archaic manner. Some feel that he drew on earlier masters in an effort, doomed by lack of imagination, to revive the fading art of Bruges. Others see David as a progressive artist who sought to base his innovations on the achievements of the founders of the Netherlandish school.
Posted by Intelliblog at 09:59