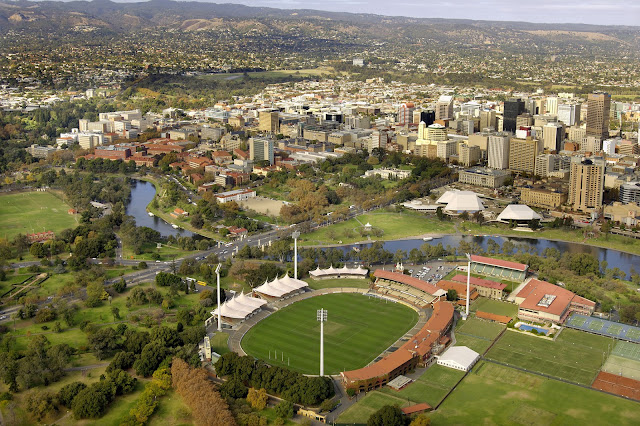 “Half the fun of the travel is the aesthetic of lostness.” - Ray Bradbury

Adelaide is of course the capital city of South Australia and the fifth-largest city in Australia. The demonym “Adelaidean” is used in reference to the city and its residents. Adelaide is north of the Fleurieu Peninsula, on the Adelaide Plains between the Gulf St Vincent and the low-lying Mount Lofty Ranges which surround the city. Adelaide stretches 20 km from the coast to the foothills, and 90 km from Gawler at its northern extent to Sellicks Beach in the south.

Named in honour of Adelaide of Saxe-Meiningen, queen consort to King William IV, the city was founded in 1836 as the planned capital for a freely settled British province in Australia. Colonel William Light, one of Adelaide’s founding fathers, designed the city and chose its location close to the River Torrens in the area originally inhabited by the Kaurna people. Light’s design set out Adelaide in a grid layout, interspaced by wide boulevards and large public squares, and entirely surrounded by parkland. Early Adelaide was shaped by religious freedom and a commitment to political progressivism and civil liberties, which led to the nickname “City of Churches”.

As South Australia’s seat of government and commercial centre, Adelaide is the site of many governmental and financial institutions. Most of these are concentrated in the city centre along the cultural boulevard of North Terrace, King William Street and in various districts of the metropolitan area. Today, Adelaide is noted for its many festivals and sporting events, its food, wine and culture, its long beachfronts, and its large defence and manufacturing sectors. It ranks highly in terms of liveability, being listed in the Top 10 of The Economist's World's Most Liveable Cities index in 2010 and being ranked the most liveable city in Australia by the Property Council of Australia in 2011 and again in 2012.
Posted by Intelliblog at 14:13