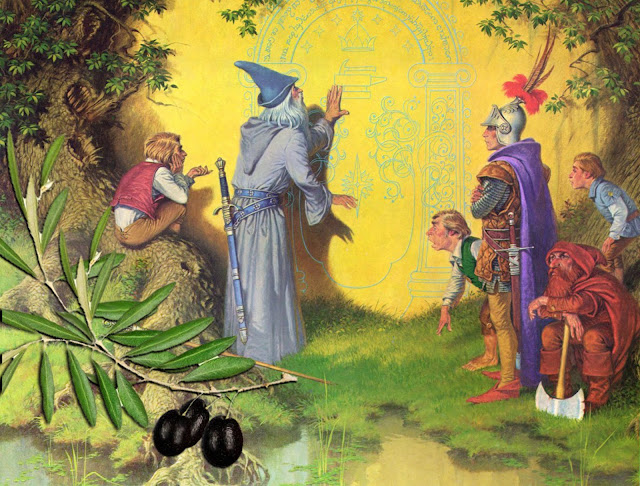 “The world is full enough of hurts and mischances without wars to multiply them.” - J.R.R. Tolkien

Today is the Ninth Day of Christmas. It is also Revolution Day in Burkina Faso and Alaskan Admission Day in the USA.

The olive tree, Olea europaea, is the birthday plant for this day.  An olive branch has long been the universal symbol of peace.  In China, for example, a traditional way of making up after a quarrel is to send the aggrieved person an olive wrapped in a piece of red paper as a sign that peace has been restored. In Greece, an olive branch was a traditional gift for the New Year, a token of peace and goodwill. The dove that returned to Noah’s Ark after the deluge, carried in its beak a sprig of olive, which Noah interpreted as a herald of peace, safety and salvation.

The ancient Greeks recounted the following legend regarding the origin of the olive tree:  When Athens was first populated, the citizens were looking for a god to become its patron and to give his name to the City.  Two gods vied for the naming rights, Poseidon who wanted the City called Poseidonia, and Athená, who wanted the City named after her. In an offer of goodwill, Poseidon, the god of the sea, struck his trident on the rock of the Acropolis and a fountain of salt water gushed out. Athená reciprocated by striking her spear on the rocky soil, out of which sprung the olive tree bearing olives.  The name of the City has since then been Athens, the city of Athená.  On the Acropolis there is an ancient olive tree, reputedly the same one that Athená gave to her city...

To dream of a fruiting olive tree is a particularly good omen as it signifies the successful completion of a project with delightful results.  To dream of olive oil is equally propitious as it implies great wealth and prosperity.  Eating olives in a dream, on the other hand, signifies frugality and days of scarcity ahead.

Seeing it is J.R.R. Tolkien’s birthday today, mention should be made of his fantastic, intriguing and greatly engaging fairy tales for adults. "The Hobbit" sets the scene for the epic "The Lord of the Rings", with "The Silmarillion" being a fitting postscript.  His creation of Middle-Earth and his peopling it with Hobbits and Elves, Giants and Monsters have given people much pleasure since its conception. C.S. Lewis, another great weaver of myth and allegory had this to say about The Lord of the Rings: “Like lightning from a clear sky... heroic romance, gorgeous, eloquent and unashamed.”  My first encounter with Tolkien’s world was when I was in Year 8, at high school. Since then I have enjoyed frequent visits to the Shire and Middle-Earth...

“The Lord of the Rings” cinematic trilogy has brought Tolkien’s work closer to a great many more people around the world, while the new film of “The Hobbit” promises to increase this author’s popularity even more.
Posted by Intelliblog at 10:55