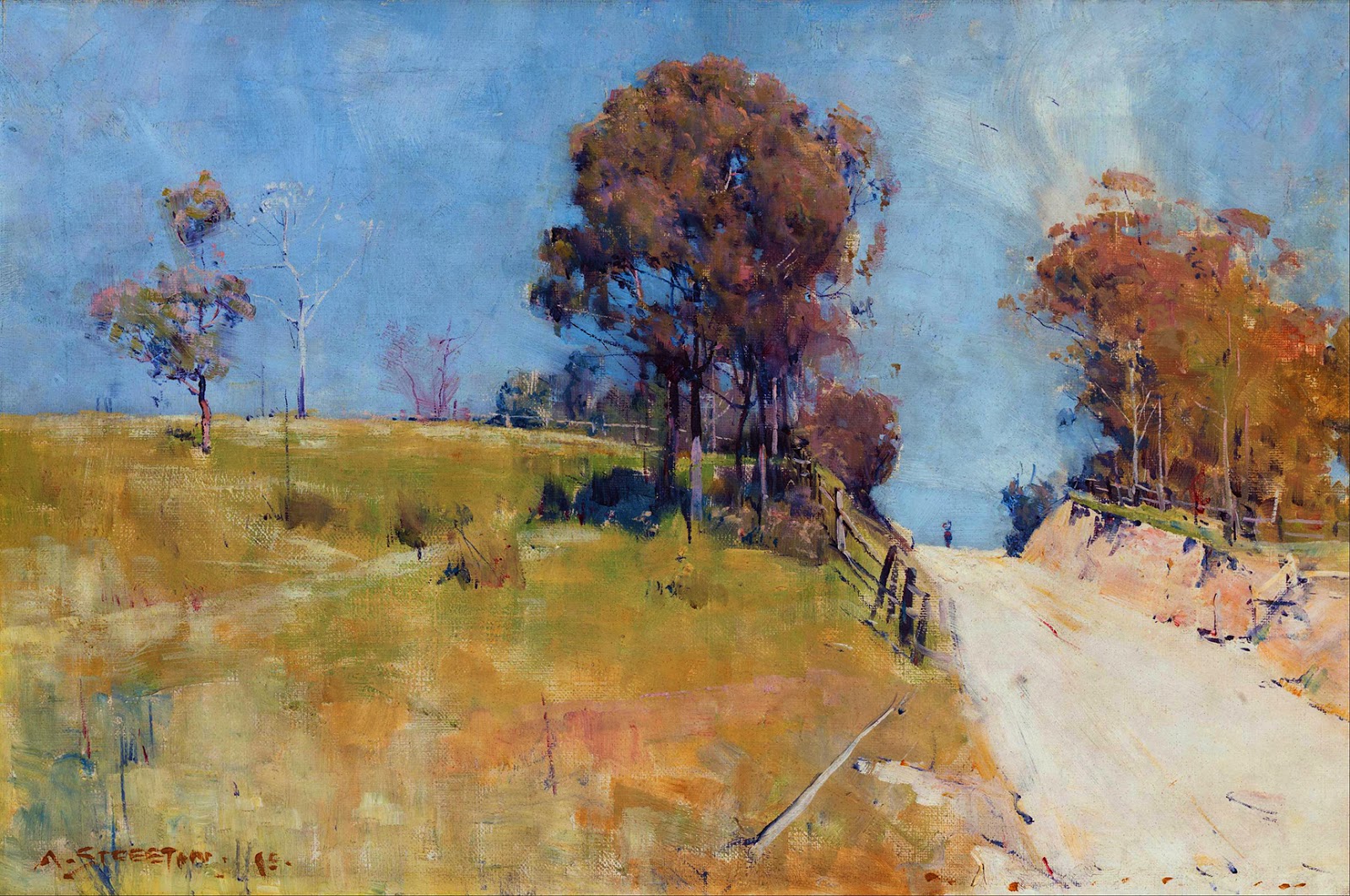 “Australia is a nation of compassion. Courage and compassion. And the third of these great values: resilience.” - Kevin Rudd

As it is Australia Day today, Art Sunday is devoted to an Australian artist. Arthur Streeton was born on the 8th April 1867, at Mt Duneed, Victoria, Australia. Streeton is one of Australia’s best known landscape painters and member of the ‘Heidelberg school’. He studied at the National Gallery School from 1884 to 1887. He was apprenticed as a lithographer with Troedel and Cooper, Melbourne, until 1888 when he left to take up painting full-time.

During the 1880s Streeton was one of a group of young Australian artists who took up the French tradition of painting outdoors. He produced direct works that were believed to capture the distinctive qualities of the Australian sunlight. Later paintings created images of Australia that were widely regarded as embodying the essence of national character.

Anxious for success overseas, Streeton left Australia for Europe in 1897. When the First World War broke out he was living in London. Since he was too old for military service he joined the Royal Army Medical Corps and worked as an orderly at the 3rd London General Hospital, Wandsworth, alongside other Australian artists, including Tom Roberts, A. Henry Fullwood and George Coates.

After his discharge as medically unfit, Streeton lobbied for the establishment of an Australian war art scheme. He was offered a commission by the Canadian government but declined, preferring to work for Australia. He was appointed an official war artist in May 1918, sent to France and attached to the 2nd Division AIF.

Streeton worked mostly around the Somme battlefields until mid-August 1918, when he returned to London. His drawings, watercolours and paintings show the AIF headquarters at St Gratien, Glisy and Heilly, the dressing stations at Villers-Bretonneaux, landscape studies and scenes of wrecked machinery. In October and November Streeton returned to France, again with the 2nd Division. This time his works concentrated on the destruction around Peronne.

Back in London, Streeton completed his contract as an official war artist with The Somme valley near Corbie, a large landscape showing the opening stages of the third battle of the Somme. With a peaceful rural landscape dominating the foreground and an artillery barrage set in the far distance, the painting embodies Streeton’s observation, (in a letter to Sir Baldwin Spencer) that: “True pictures of Battlefields are very quiet looking things. There's nothing much to be seen - everybody & thing is hidden & camouflaged - it is only in the Illustrated papers one gets a real idea of Battle as it occurs in the mind of the man whose never been there”.

Streeton returned to Australia in 1920, a famous and popular artist. He made painting trips to many Australian sites and in 1928 was awarded the Wynne prize for landscape for “Afternoon Light: the Goulburn Valley”. In his later years Streeton became a national institution. He continued to paint sunny, pastoral landscapes, but many were mannered, fluent and facile, and devoid of the inspiration of his radical early work. Leading critics, particularly J. S. MacDonald and Lionel Lindsay, extolled his art which (with that of Roberts and McCubbin) was to some extent appropriated by the art establishment in the cause of a conservative, isolationist nationalism. Most responded to the optimism of Streeton’s romantic blue and gold vision of a pastoral Australia. He was knighted for his services to art in 1937 and died at Olinda, Victoria, on September 1st, 1943.


**************************************
Australia Day is the official national day of Australia. Celebrated annually on 26 January, it marks the anniversary of the 1788 arrival of the First Fleet of British Ships at Sydney Cove, New South Wales, and raising of the Flag of Great Britain at that site by Governor Arthur Phillip. In contemporary Australia, celebrations reflect the diverse society and landscape of the nation, and are marked by community and family events, reflections on Australian history, official community awards, and citizenship ceremonies welcoming new immigrants into the Australian community.

The meaning and significance of Australia Day have evolved over time. Unofficially, or historically, the date has also been variously named “Anniversary Day”, “Invasion Day”, “Foundation Day”, and “ANA Day”. 26 January 1788 marked the proclamation of British sovereignty over the eastern seaboard of Australia (then known as New Holland). Although it was not known as Australia Day until over a century later, records of celebrations on 26 January date back to 1808, with the first official celebration of the formation of New South Wales held in 1818.
On New Years Day 1901, the British colonies of Australia formed a Federation, marking the birth of modern Australia. A national day of unity and celebration was looked for. It was not until 1935 that all Australian states and territories had adopted use of the term "Australia Day" to mark the date, and not until 1994 that the date was consistently marked by a public holiday on that day by all states and territories.
In contemporary Australia, the holiday is marked by the presentation of the Australian of the Year Awards on Australia Day Eve, announcement of the Australia Day Honours list and addresses from the Governor-General and Prime Minister. It is an official public holiday in every state and territory of Australia, unless it falls on a weekend in which case the following Monday is a public holiday instead. With community festivals, concerts and citizenship ceremonies, the day is celebrated in large and small communities and cities around the nation. Australia Day has become the biggest annual civic event in Australia.
Posted by Intelliblog at 13:36